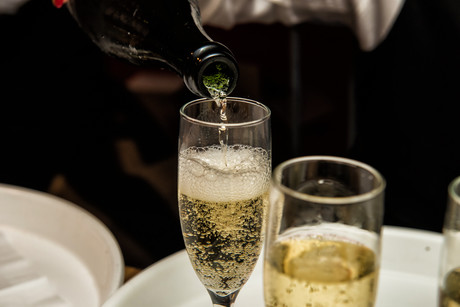 Are you looking for an out-of-this-world champagne tasting? Maison Mumm has announced it is launching a new champagne bottle and glass in September 2018 which will allow astronauts and other space travellers to sip champagne in zero gravity.

Mumm Grand Cordon Stellar is the result of a three-year partnership between Maison Mumm and Spade, an agency specialising in space design. But the fundamental question is, how does the liquid work in zero gravity?

“For the last 40 years, space travel has been shaped by engineers rather than designers. Instead of seeing zero gravity as a problem to be solved, we look at it as a design possibility,” explained Spade founder Octave de Gaulle. “The main design challenge for Mumm Grand Cordon Stellar was actually getting the liquid out of the bottle.”

According to the company, the bottle uses the champagne’s gas to expel the liquid into a ring-shaped frame, where it is concentrated into a droplet of bubbles. Once it has been released into the air, the floating champagne bubble can be caught in a specially designed glass thanks to surface tension.

The effervescent ball of foam that leaves the champagne bottle transforms into a liquid in the mouth, which Mumm’s Cellar Master Didier Mariotti describes as “a very surprising feeling”.

Featuring a tapered stem and a concave cup, Mumm’s new glass design can be clinked together in a traditional toast. Celebrations aside, Mariotti said the zero-gravity experience also adds new taste characteristics. “Because of zero gravity, the liquid instantly coats the entire inside of the mouth, magnifying the taste sensations. There’s less fizziness and more roundness and generosity, enabling the wine to express itself fully.”

While the company stated Mumm Grand Cordon Stellar was created to help astronauts feel more human and at home in space, the experience isn’t limited to them alone. Participants in the zero gravity flights organised by Novespace will get to try the space-friendly fizz, and the company is also discussing potentially supplying it to future space missions and commercial space flights.

I don’t know about you, but I’ll raise a glass to that!