Plastic made from the perfume of apples 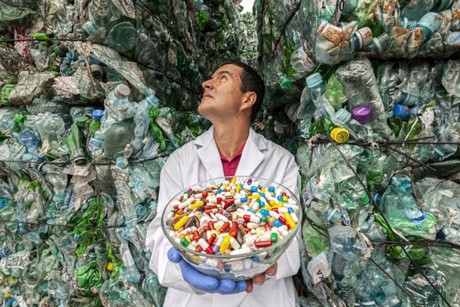 A waste-free method of obtaining organic monomers is coming into being and it does not require high temperatures or expensive catalysts. It is the idea that a team of scientists from the Institute of Physical Chemistry of the Polish Academy of Sciences (IPC PAS), led by Professor Juan Colmenares, is working on.

The scientists have taken a common product — hydroxymethylfurfural (HMF) — which on an industrial scale is obtained by the acid hydrolysis of sugars obtained, among others, from cellulose, lignin or inulin. They have turned it into aldehyde, 2,5-diformylfurfural (DFF), a compound that finds an application in many fields of industry, but, above all, it can be used to produce environmentally friendly plastic.

“We want it to be possible to replace PETs with something that decomposes in a few months or at most a few years,” explained Professor Colmenares. “Today’s plastics, made from petroleum, contain phthalates and other plasticisers — a sort of ‘soup’ of organic and even inorganic compounds — and no bacteria or fungus on their own can break them down.

“Materials produced based on DFF contain furans — sugars, and what comes from nature is better received by nature,” the professor explained.

It is not the product itself (DFF) which is new here, but the method of obtaining it, described in a paper published in Applied Cat. B. Until now, high temperatures (100–150°C) and complicated technology have been required. However, Professor Colmenares’ team only need a box they themselves produce — a photoreactor, a light (at present this is an LED lamp emitting near UV - 375 nm, but ultimately the energy is to be provided simply by the sun) and a catalyst — manganese dioxide nanowires.

“These are long and very, very thin, and their structure increases the absorption of light. Due to the unique thermo-photo-catalytic properties of manganese dioxide, the nanorods have a much larger contact surface with the particles of the starting material and are better at activating it. So, virtually all the HMF changes into DFF. 100%!” the professor enthused.

He explained that it’s a waste-free method and the oxygen in the air is sufficient to obtain the pure monomer needed for the production of linear polymers and, for example, apple juice bottles.

But won’t such rapidly decomposing plastic break down too quickly? Before, for example, we manage to drink the apple juice? “No,” laughed the professor. “In practice it takes a few years to decompose, but even if the reaction occurred faster, the user would at most drink a little ‘good’ plastic. One that is harmless to the body.”

Poland is, for example, a large producer of apples and juice, but what happens to all the tonnes of apple peel and all the waste products?  “It’s poured into the waste disposal, it pollutes the water, takes up oxygen and then it’s the end of all water life,” the professor said. Meanwhile, it contains all the sugar, pectin and levulinic compounds that his team’s method requires — basically it uses rubbish to make something desirable out of nothing.

The bottles pictured are made of lignocellulose, perfumes of apples. Image Credit: IPC PAS, Grzegorz Krzyzewski; thanks to www.bys.com.pl

To wear a mask or not this bushfire season?

Liquid Handling 4.0: what to consider when selecting OEM robotic components