Form and fill in one step and save time, space and resources 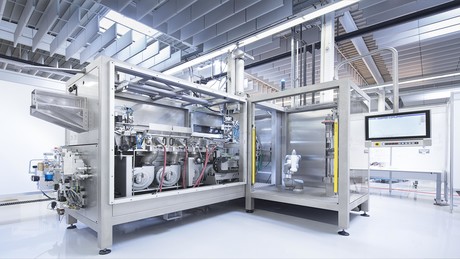 A one-step process for forming and filling plastic bottles is on the horizon with the linear machines slated for release in 2019.

The company behind this innovation, KHS, demonstrated its FormFill process at drinktec in September, showing how the system will save both time and floor space, facilitate individualisation of plastic packaging and maximise resource utilisation.

In the FormFill process KHS will be integrating what to date were two separate processes into one for the first time ever, at the same time presenting a marketable machine concept. Up until now two individual function modules stretch blow moulded the PET preform and then filled the resulting bottle in separate stages. With the KHS FormFill, bottlers can now form and fill bottles on a single machine.

The current development is suitable for still waters, hot-fill, liquid soaps and detergents. The next stage will focus on adapting the system to cope with the increased demands placed on the blow moulding system by carbonated and aseptic beverages.

As in the conventional processing of plastic containers the machine heats up the preforms according to the required temperature profile. The product to be filled is then forced into the PET preforms under pressure with a controlled volume flow. The bottle is formed by the product to be filled as opposed to the compressed air used to date. In this process the preform material is automatically distributed along the inner contours of the container shape. The stretch rod aligns the bottle lengthwise and is automatically retracted from the container after filling. The given fill level is reached when the displacement volume is removed and before the cap is placed on the neck.

KHS FormFill yields savings potential — and not just in line operation: by doing away with an entire function module and with the smaller diameter of the rotary machine the total amount of space required is reduced. In the current test environment of 40,000 bottles/hour, the new procedure only needs about 25% of the installation space of standard stretch blow moulder/filler blocks when filling beverages.

Inline operation users will see a boost in efficiency with regard to time, energy and maintenance especially. As the conventional stretch blow moulding process is no longer required, KHS FormFill fills PET containers more quickly. Forming and filling takes about the same time as the formerly separate stretch blow moulding process. Saving on the high-pressure air compressor alone results in a considerable drop in energy consumption. Maintenance costs are cut by the use of fewer components and format parts.

The new machine can be integrated into existing packaging processes.

Current findings even suggest that lower film thicknesses can be used for secondary and tertiary packaging. As the inside skin of the containers cools faster in the FormFill process than with the standard method thanks to direct filling, KHS produces containers of greater stiffness with the same wall thickness. This in turn allows further materials to be saved in the preforms. Even if the preforms currently in use can be processed on the new plant equipment, KHS recommends that preform geometries are revised in order to exploit the possible potential for saving materials to the maximum.

Design details such as logos can also be better processed — increasing the scope for individualisation.

The systems supplier wants to commission the first FormFill rotary machine as a prototype in 2018, after which it is to be readied for market. The technology has already been tested for 0.5, 1.0 and 1.5 L PET bottles.