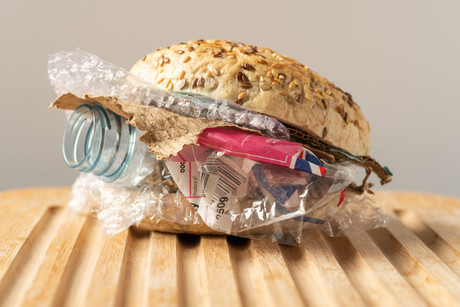 These days, many people are concerned about plastic waste; however, the convenience, mechanical properties and cost of plastic food packaging are hard to beat. But now, a growing number of innovators and entrepreneurs are trying to make edible packaging and tableware from foods like seaweed, milk proteins and potato starch, according to an article, The Time Is Now for Edible Packaging, in Chemical & Engineering News (C&EN), the weekly news magazine of the American Chemical Society, produced in collaboration with ACS Central Science.

Edible films, wrappers and straws have already found a specialty market and are starting to attract attention from larger food and beverage companies, according to freelance contributor Prachi Patel. At the 2019 London Marathon, the start-up company Notpla handed out sports drink pods, packaged in seaweed-based capsules, to thirsty runners. Although the packaging is safe to swallow, runners can choose to spit out the film. In that case, it biodegrades in only 4–6 weeks.

The article also revealed that an Indonesian start-up called Evoware has tested its edible seaweed-based packaging and is now selling it in small quantities for instant-noodle seasoning sachets and coffee pouches. At the US Department of Agriculture, chemical engineer Peggy Tomasula has made transparent films from the milk protein casein, which could be suitable for the dairy industry. The films are said to be 500 times as effective at blocking oxygen as traditional plastic wrap, according to the USDA.

Although edible packaging is gaining ground, challenges remain. Some worry about the hygiene of eating packaging that has been touched or exposed to germs during transport or while sitting on the shelf. Experts agree that edible packaging will require an outer layer, but these materials could also be made from compostable or sustainable materials, such as paper. Another obstacle is public acceptance: will people eat something that is usually thrown away? Consumers could perhaps be convinced if the packaging includes nutrients, such as vitamins or proteins, or just tastes good. And finally, improvements in heat and moisture stability need to be made before edible packaging can enjoy widespread use.