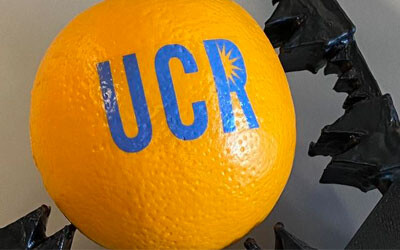 Engineers at the University of California, Riverside (UC Riverside) have unveiled an air-powered computer memory that can be used to control soft robots. The innovation overcomes one of the biggest obstacles to advancing soft robotics: the fundamental mismatch between pneumatics and electronics.

Pneumatic soft robots use pressurised air to move soft, rubbery limbs and grippers, and are superior to traditional rigid robots for performing delicate tasks. They are also safer for humans to be around. Baymax, the healthcare companion robot in the 2014 animated Disney film Big Hero 6, is a pneumatic robot for good reason.

Pneumatic logic predates electronic computers and once provided advanced levels of control in a variety of products, from thermostats and other components of climate control systems to player pianos in the early 1900s. In pneumatic logic, air — not electricity — flows through circuits or channels and air pressure is used to represent on/off or true/false. In modern computers, these logical states are represented by 1 and 0 in code to trigger or end electrical charges.

Pneumatic soft robots need a way to remember and maintain the positions of their moving parts. The researchers realised that if they could create a pneumatic logic memory for a soft robot, they could eliminate the electronic memory currently used for that purpose.

The researchers made their pneumatic random-access memory, or RAM, chip using microfluidic valves instead of electronic transistors. The microfluidic valves were originally designed to control the flow of liquids on microfluidic chips, but they can also control the flow of air. The valves remain sealed against a pressure differential even when disconnected from an air supply line, creating trapped pressure differentials that function as memories and maintain the states of a robot’s actuators. Dense arrays of these valves can perform advanced operations and reduce the expensive, bulky, and power-consuming electronic hardware typically used to control pneumatic robots.

After modifying the microfluidic valves to handle larger air flow rates, the team produced an 8-bit pneumatic RAM chip able to control larger and faster-moving soft robots and incorporated it into a pair of 3D-printed rubber hands. The pneumatic RAM uses atmospheric-pressure air to represent a ‘0’ or FALSE value, and vacuum to represent a ‘1’ or TRUE value. The soft robotic fingers are extended when connected to atmospheric pressure and contracted when connected to vacuum. 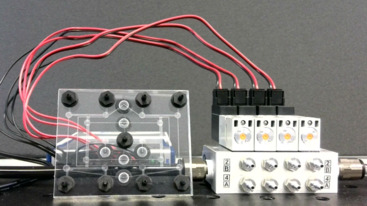 By varying the combinations of atmospheric pressure and vacuum within the channels on the RAM chip, the researchers were able to make the robot play notes, chords and even a whole song — ‘Mary Had a Little Lamb’ — on a piano.

In theory, this system could be used to operate other robots without any electronic hardware and only a battery-powered pump to create a vacuum. The researchers note that without positive pressure anywhere in the system — only normal atmospheric air pressure — there is no risk of accidental over-pressurisation and violent failure of the robot or its control system. Robots using this technology would be especially safe for delicate use on or around humans, such as wearable devices for infants with motor impairments.

The work, titled ‘A pneumatic random-access memory for controlling soft robots’, was published in the open-access journal, PLOS One.