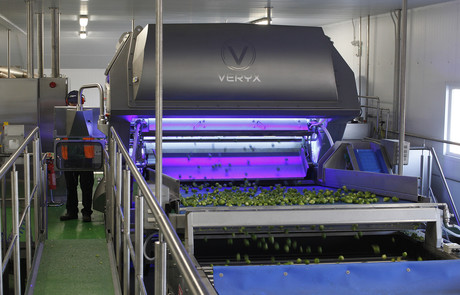 T H Clements grows 20 varieties of Brussels sprouts, which are cleaned, sorted, size graded and bulk packed in cold storage during the August-to-March harvest. They are then either loose packed into 14-kilogram bulk trays for foodservice and wholesale customers or sent to vertical-form-fill-seal machines to produce between 200–500 g retail packs.

Richard Mowbray, Commercial Director at T H Clements, highlighted the importance of ensuring fresh, high-quality products are delivered to retailers in the shortest possible time to maintain customer satisfaction. To achieve this, the company invests in technology such as Key’s belt-fed VERYX B175 sorter, which replaced three old sorters.

It can inspect up to 12.5 tonnes/h of Brussels sprouts and helps eliminate blind spots, which T H Clements Factory Manager Graham Neal said was previously a challenge.

“Brussels sprouts are difficult for most sorters — they cast shadows with their deep shape and open leaves when illuminated. VERYX, with its all-sided surface inspection, gives us a 360-degree view of each Brussels sprout,” he said. “Our new sorter has doubled our throughput without increasing our labour at the same time we’re exceeding our high expectations for defect removal accuracy.”

Before digital sorting, mechanical graders remove Brussels sprouts that are smaller than 20 mm and larger than 40 mm, as well as some FM and EVM. A Key Iso-Flo vibratory conveyor with a customised bar screen at VERYX’s infeed also removes FM, EVM, loose leaves and small pieces, and spreads the product for optimal presentation to the sorter’s inspection zone.

“About 90% of all FM and EVM is removed before the digital sorting system, and then the vibratory infeed shaker that’s integrated with our VERYX removes even more. That means about 98% of the product going into the sorter is sprouts, which helps maximise its capacity and yield,” explained Neal. “Since most FM and EVM is removed with mechanical processes upstream, we’ve programmed our VERYX to focus on rejecting sprouts with disease and rot as well as pest damage, yellow leaf and other defects, although it’s capable of finding and ejecting much more.”

Featuring auto-learning, self-adjusting algorithms, predictive system diagnostics and smart alarms, it is designed to maximise automation and can adapt to normal fluctuations in the product and environment without manual intervention. Recipe-driven operation enables settings to be stored in memory to speed product changeovers and ensure consistent sorting results.

“VERYX is so simple to use, one operator is able to run the entire processing line. The intuitive user interface presents different views to users of various levels, depending on their needs, and it’s password protected. The engineering manager, the main operator and I are the only ones who have a deep level of access, which prevents inadvertent changes by unqualified personnel,” said Neal. “If we need any support, Key’s engineers can access the sorter remotely to take control and make changes to resolve an issue very quickly. Every point of contact we’ve had with Key has been excellent, starting with our trials in Belgium through to installation, start-up and beyond.”

The Eriez Xtreme MD is capable of detecting needles, pins, etc inserted into food, and alerts...

The Tecpro hydrokinetic IBC cleaner is suitable for the food and beverage industries, as it does...

The IPS 400i from Leuze electronic is a small camera-based positioning sensor for double-depth...