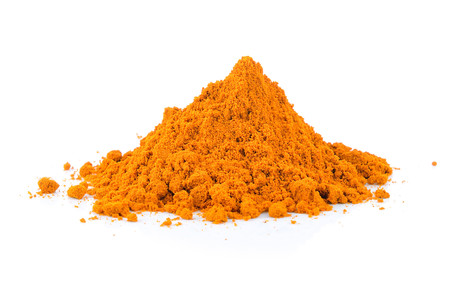 Caking is a complex phenomenon that can be a significant source of problems. While there are solutions, they are very specific to the root cause involved, hence the need for a quantifiable approach informed by scientific knowledge of the characteristics of the material involved and the environment.

Caking occurs when free-flowing materials, such as food powders, agglomerate when stored at rest. Caking problems can be challenging to solve, as agglomeration is not always evident at first. For example, a product may be free-flowing during packaging; yet consumers will report that the material they received has become cohesive or formed lumps. The consequences of unintended agglomeration are never pleasant. Caking may lead to a decline of sales or a reduction in productivity when returned product must be reworked. Caking can also subject plant personnel to dangerous situations when rat holes in caked material in storage vessels collapse or when operators need to manually dislodge solidified material.

There are many potential causes of caking that are highly material and environment dependent. Addressing a caking problem often involves identifying process control variables or product specifications based on likely causes of caking, and embarking on a program in which samples are collected and their caking properties are quantified. The best metric for quantifying caking or its propensity to occur is not always evident.

Three main mechanisms are responsible for caking in bulk materials: 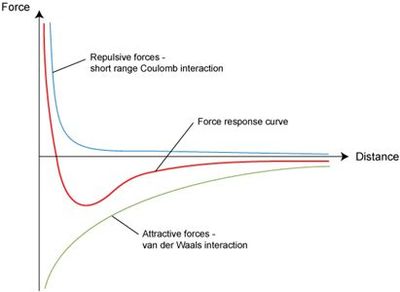 Polar interactions occur when adjacent particles contain regions that are permanently electron rich or electron poor — an example being hydrogen bonding where a hydrogen atom bonds to a strongly electronegative atom. This is shown in Figure 2.

When moisture evaporates, a film comprising soluble material and water may be left on the surface of the particles. As further moisture is removed, due to a temperature change or exposure to dry air, the film becomes more viscous, and this can have the effect of a binding agent, which strengthens the particle bonds, forming solid bridges. This is due to the film having a water vapour pressure greater than the interstitial moisture’s partial pressure, such that it becomes supersaturated and eventually the soluble material crystallises, thus becoming more viscous and leading to solid bridges forming between the particles.

This can also be inferred from a material’s moisture sorption isotherm, which relates relative humidity and equilibrium moisture content. An example of a Type II isotherm, which has the sigmoidal shape characteristic of many materials prone to caking, is shown in Figure 3. 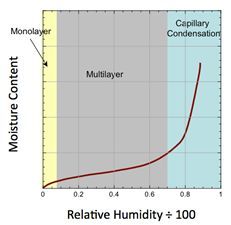 Explanation of the three regions as shown in the graph in Figure 3:

If components of the solids are water soluble, they may precipitate when the moisture evaporates. This leads to the formation of solid or crystalline bridges, which result in very strong cakes.

For many materials, softening or deformation of particles can result in caking. Plastic creep is the tendency of a material to deform when under consolidation, and this can be severe when materials are subjected to elevated temperatures for prolonged periods, especially above their glass transition temperature or at their melting point. For many materials, viscosity and elastic modulus are strong functions of temperature — or sintering. The reduction in viscosity and modulus, which arises from an increase in temperature, allows deformation to proceed more quickly and to a greater extent, resulting in increased contact area between adjacent particles.

Consolidation, moisture, temperature effects, particle size, attrition and impurities can all lead to caking occurring. These primary causes often occur together and one can trigger another.

Unlike liquids where the pressure increases linearly with depth, with solids the pressure profile will be asymptotic with a maximum pressure that depends on diameter.

Moisture can lead to liquid forces and solid bridges forming. Moisture can also act as a plasticiser, causing the particles to soften and deform, which can result in caking due to an increase in the inter-particle contact area and a decrease in the distance between neighbouring particles. Moisture can be present in a material as:

With moisture present, a material is also subjected to moisture migration, which can occur with the following steps taking place:

A material’s particle size can affect caking. Fine materials are generally more prone to caking due to their high specific surface areas and high concentration of inter-particle contacts. However, coarser materials may also be prone to caking if they contain a wide particle size distribution, due to more points of contact between large particles and surrounding smaller particles. Also on the contrary, if the fine material contains very fine particles (typically sub-micron in size), of different composition that are non-binding to the base material, then these particles can in fact act to prevent caking, since they increase the distance between individual particles.

Segregation can also lead to variability in particle size, which can result in a concentration of fine material that can again lead to caking. Segregation by particle size depends on many factors, but most instances are as a result of forces that act on a material during handling. Examples such as sifting segregation can occur when relatively free-flowing materials containing a range of particles sizes form a concentration of fines at the centre and coarse at the periphery, when piled.

In summary, the likelihood for caking generally decreases with increasing particle size.

Attrition of a material during storage or transport can cause caking problems. Attrition results in an increase in fines, which, due to their high surface area and resulting increase of inter-particle contacts, has a similar effect to particle size effects stated above. Further to this, attrition can also expose more reactive surfaces or moisture that was previously trapped inside the interior of the particles, which may create further inter-particle cohesive forces.

Impurities in a material can sometimes lead to caking for a range of reasons. Impurities may be a source of fines that can tend to have higher cohesive strength. In some solids, impurities may lower the solid’s melting or softening temperature, resulting in plastic creep or sintering.

To quantify caking or its propensity to occur, a test procedure in which the effect of process control variables on caking is measured using small samples offers several advantages. Temperature, relative humidity and consolidation pressures expected when a material is stored should be simulated during testing to quantify the strength of the resultant caked material. Cycles in temperature and relative humidity can be simulated for the material being tested, using an environmental chamber or similar device. Product specifications such as particle size, and composition, can also be included as part of the testing, by ensuring the small samples are representative of what is stored or handled. Results can be confidently applied because the tests conducted on a small sample will replicate conditions in larger-scale containers or storage vessels.

The strength that a material gains when stored at rest can be measured by shear cell testing. This form of testing to quantify caking has proven successful over other methods (which are typically qualitative) because it measures the strength of the material over a relevant range of consolidation pressures. Schematics of direct and annular shear cell testers are shown in Figure 4. 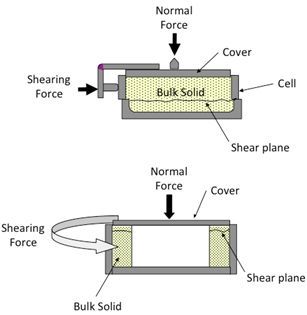 The tests are described completely by ASTM D-6128 and ASTM D-6773. A sample of material is placed in a cell and then pre-sheared or consolidated by applying a normal stress and then shearing it until the measured shear stress is steady. Next, the shear step is conducted, in which a reduced load is applied (ie, less than that used for steady shear stress), and the sample is again sheared until it fails. The pre-shear and shear steps are then repeated at the same pre-shear consolidation level for a range of shear step reduced normal stresses.

The pre-shear step establishes a consolidation state that replicates the pressures that would be experienced at a particular position in a storage container or vessel. The shear step determines the stress required to cause a consolidated material to fail.

If a material has caked during storage, its cohesive strength, as described by its Time Flow Function, will be greater. The Time Flow Function, which is the relationship between consolidation pressure and the material’s cohesive strength after it has been stored at rest, is determined in a manner similar to that used to measure its Instantaneous Flow Function. When conducting a time test, the sample is kept in a consolidated state after the pre-shear step for the time of interest and then sheared until failure. When the measured cohesive strength of a material is greater after storage at rest than during continuous flow, this is an indication that caking is likely to occur under the test conditions.

Shear cell testers can also be used to measure the material’s wall friction, which is required if the solids stress in a rigid container must be calculated. Wall friction is measured by following the method described in ASTM D-6128. To measure wall friction, the sample is placed inside a cell on a flat coupon of wall material. A normal load is then applied to the material and the shear stress that is required for the sample to flow along the wall is measured. The friction coefficient is the ratio of the shear stress to the normal stress. Because it is a function of normal pressure, the test is repeated over a range of normal loads.

Some materials exhibit plastic creep, which is the tendency of a solid material to slowly deform permanently under the influence of a mechanical stress. The engineering strain ε is defined as the ratio of total deformation to the initial dimension of the material body in which the forces are being applied. Because bulk density can be measured during a shear cell test.

Part 11 of this article will look at how to solve caking problems.