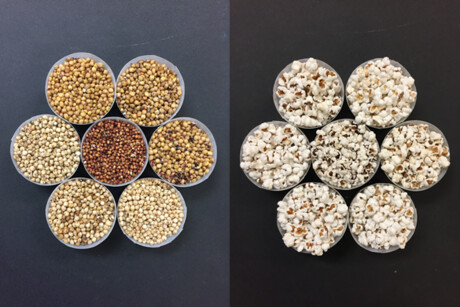 Scientists at Texas A&M University have developed a type of sorghum that is made to be popped like popcorn.

Sorghum is a grain used variously as animal feed, for flour and syrup, and as a biofuel, among other areas. However, while its popping qualities have long been known about — popped sorghum is a popular snack around the world — scarce research has been done to develop a variety of sorghum that is grown specifically for its popping qualities.

The Texan researchers have now specifically grown sorghum with popping characteristics as a primary selection trait. Large kernels and a high percentage of kernels popping have been selected so that the plant can be used for its puffy products.

Chowing down on a bowl of popped sorghum is not the singular goal of this research. By making a highly poppable sorghum crop, food manufacturers will have a new ingredient that they can utilise by itself and as a corn alternative.

For example, because they are small, the popped kernels can be used in products where popcorn would be uncomfortably big, such as in granola bars. They are also more tender than popcorn and do not contain a hull, making for a softer mouthfeel. 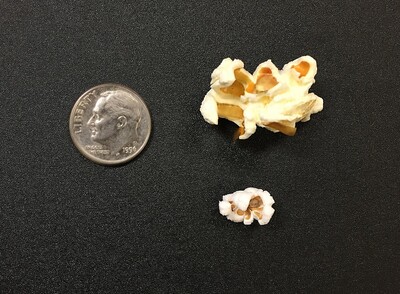 Image credit: MA Kent.  A comparison of popcorn (upper right) to popped sorghum (bottom right). The smaller size of popped sorghum could be a benefit for its use in granola bars and sweets. The coin is used to provide scale.

Popped sorghum doesn’t have a distinct flavour of its own so flavour can easily be added to it without the cereal itself being distracting to the consumer. Additionally, sorghum is gluten-free so people with such an intolerance can eat it.

Finally, the starches and proteins in popped sorghum are more digestible than the unpopped grain, which means that flours and animal feeds could also be derived from these sorghum varieties developed for popping.

The researchers will be continuing their work on the grain and have made seeds from the varieties they’ve developed available to breeders.

A full paper outlining their work was recently published in the Journal of Plant Registrations.

Top image credit: MA Kent. Sorghum grains come in many colours, as displayed on the left side of dishes. When popped, the fluffy material called endosperm is white, with hulls remaining unchanged.

A report has been released that looks at the egg industry’s economic viability, how it is...

The yoghurt company has turned its sights towards milks as it launches two new refrigerated milk...

Over 20 food manufacturers and producers have pledged to help increase the amount of fibre that...

Waste-to-energy facility ramps up in Melbourne

Australians invited to have their say on the future of water