Synthetic wheats made from ancient wheat and wild grass species can create a bridge for transferring novel sources of genetic diversity from wild relatives into varieties already being farmed. Researchers are claiming that UK wheat yields could be boosted by up to 30% with the introduction of a new wheat bred from a wild grass species.

The National Institute of Agricultural Botany (NIAB) in Cambridge has recreated the original rare cross between an ancient wheat and wild grass species that happened in the Middle East 10,000 years ago. The result is a ‘synthetic’ wheat which, when crossed with modern UK varieties, could offer new sources of yield improvement, drought tolerance, disease resistance and input use efficiency.

Over the next 50 years, the world needs to grow more wheat than has been produced in the 10,000 years since agriculture began. But wheat yields are showing signs of reaching a plateau; the national average UK wheat yield on-farm has stalled at around 8 t/ha for the past 12 years. 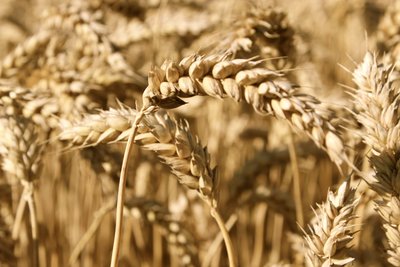 NIAB CEO Dr Tina Barsby says: “The original ancient cross has, so far, provided the genetic basis for all today’s modern wheat varieties. Over the years, domestication of the wheat plant has increased yields, but recently those increases have slowed, leading to concerns for future food security. This is partly because domestication has eroded wheat diversity and the possibilities for improvement from within the current wheat germplasm pool are reaching their limit.

“NIAB’s Synthetic Hexaploid Wheat breeding program recaptures some of that variation from those ancient wild relatives lost during the domestication of wheat as agriculture evolved. Fully crossable with modern wheat, these synthetic wheats are an excellent bridge for transferring novel sources of genetic diversity from wild relatives into varieties already grown by farmers across the UK.”

The synthetic wheat program involves crossing durum pasta wheat with wild goat-grass using traditional crossing techniques in the glasshouse combined with tissue culture in the research laboratory to guarantee seed germination. The resulting hybrid plants produce the ‘synthetic’ seed, which is then used in crossing programs with current varieties.

Senior plant breeder Dr Phil Howell says: “Based on early-stage trials, we’re confident that the performance gains and level of potentially valuable variation observed, through this novel step of resynthesising the original wheat plant, points to a major transformation in the wheat improvement process. Yield increases of up to 30% have been produced in early field trials, despite the past few years being cold, wet seasons where lack of sunlight depressed yield.

“The plan is to use this material in screening experiments to provide breeders with material adapted to the challenges of the future, with restrictions on pesticides and fertilisers coupled with projected climate change, with varieties on-farm by 2019 at the earliest,” says Dr Howell.

The original pre-breeding work was funded by the BBSRC under their Crop Science Initiative, with additional industrial funding from three leading breeding companies, the HGCA and the NIAB Trust.

A BBSRC Super Follow-On Fund award has just been granted in which the best of the original pre-breeding lines will be further tested and moved towards potential commercialisation and release as varieties on farm. This extension has considerable in-kind contributions from the three breeders involved in the project (KWS, Limagrain and RAGT), and any income arising from commercialisation will be shared to reflect this public/private breeding partnership.

NIAB’s work on developing its own SHWs, based on wild goat-grass sources that have not been previously exploited, forms part of the BBSRC’s £7 million investment into public sector pre-breeding in wheat (www.wheatisp.org).