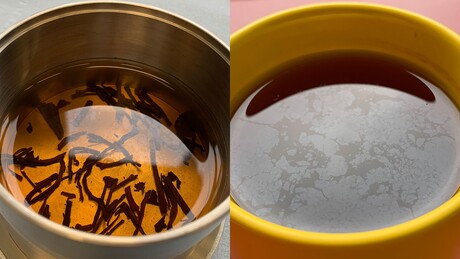 Scientists from ETH Zurich have used rheology (the study of the flow of matter) to analyse the thin film that can form on cups of tea and have found that it can be useful in a multitude of ways. This film forms when a cup of tea is left to cool after steeping and its formation is affected by water hardness, acidity, sugar and milk, tea concentration and the tea’s brewing temperature.

Prior to the 1990s it had been thought that the film was a result of waxes found on tea leaves, but it was subsequently found to largely be the result of calcium carbonate, found in hard tap water. In a simple demonstration of how the water used to brew tea changes the resulting beverage, if one was to replace regular tap water with perfectly pure water, the tea would be surprisingly bitter.

The study has practical implications that are of industrial interest. The conditions that contribute to the formation of the strongest form of the film might prove useful, with packaged tea beverages potentially seeing a longer shelf life and milk tea products benefiting from emulsion stabilisation. On the other hand, conditions that form weak films could be utilised for dried tea mixes. An acidic component added to tea can be used to reduce the visibility of the film while adding flavour.

The full study was published in the Physics of Fluid and can be found here.

The new LEDs can be used to easily and cheaply detect gases, including those that are produced by...