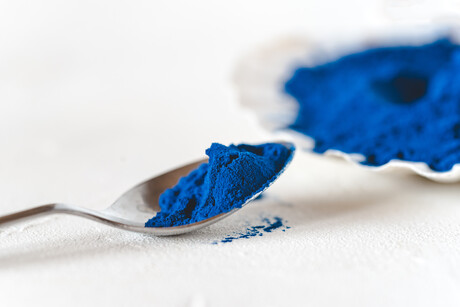 Researchers at Cornell University have discovered how to stabilise a vibrant blue colorant, thus allowing it to be used in a wide range of foods. The colourant, phycocyanin, is entirely natural, making it attractive to companies looking to avoid synthetic colouring. It is the main ingredient in spirulina, also known for its pleasantly blue colour.

Unfortunately it is difficult to use phycocyanin as it can be unstable when used in soft drinks and when exposed to fluorescent lights, thus making it unattractive to use the colour in these products.

Now though, Cornell scientists have found that through the use of Size-Exclusion Chromatography and Small-Angle X-ray Scattering (smartly abbreviated to SEC-SAXS), when exposed to X-rays and different pH levels, the colouring properties of phycocyanin can be altered.

To produce this effect, the phycocyanin was loaded into a biological fluid and then put through the SEC-SAXS process, which involved firing high-intensity beamline X-rays into tiny droplets of the fluid. Through this process the scientists were able to tune the proteins that make up the colourant and thus change its colours and stability. This change means the colourant could be used as a dye, where previously it would have destabilised and lost its vivid hue.

More research will obviously need to be done in order to industrialise the process to allow for widespread use of this stabilised version of the phycocyanin. As it is now though, the method shows promise in altering the colourant so that its use is widened to a greater range of products.

The full article, published in Biomacromolecules, is available here.

The concept helps consumers understand the ratio of fibre, sugars and carbohydrates, a good...

The program will see surveillance against citrus pathogens cast wide across Australia in a bid to...

The nutritional upside of eating insects

Scientists have analysed insect proteins to understand their composition and how best to...