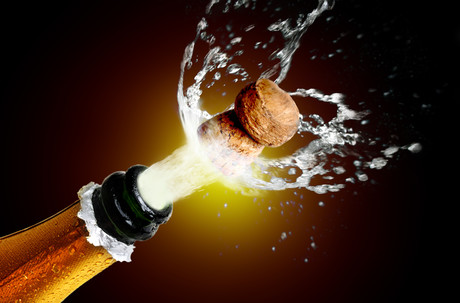 Research indicates that the gases ejected from champagne bottles in the milliseconds after popping the cork display similarities with patterns previously described in jetfighter and rocket plume exhausts. Researchers visualised the jets expelled from the throat of bottlenecks, providing a clearer picture of the cork-popping process for bottles of champagne and sparkling wine.

Scientists used high-speed photography to observe how gases in champagne bottles behaved at different temperatures. The characteristic fizz attributed to sparkling wines comes from dissolved carbon dioxide bubbling out of the wine; the CO2 is kept in the liquid by pressurised gaseous CO2 in the neck of the bottle.

Uncorking the bottle quickly causes the gas-phase CO2 and small amounts of water vapour to expand into the ambient air, creating the ‘popping’ sound and launching the cork from the bottle. The CO2 and water vapour cool and condense into fog as a result of the sudden drop in pressure; warmer bottles place the gas in higher pressure, resulting in a more drastic pressure change during uncorking and, counterintuitively, greater cooling.

Gerard Liger-Belair and colleagues compared the uncorking of bottles kept at 20°C and at 30°C. When uncorked at 20°C, the gases froze into crystals smaller than the wavelength of light, creating a blue haze resembling a blue sky. Higher pressure and greater cooling that occur when uncorking at 30°C led to larger crystals, resulting in the grey-white colour of rainclouds. Researchers also observed ‘Mach disks’, visible shockwaves that occur when gas expands into ambient air faster than Mach 1, during uncorking — a similar effect is often observed in the exhaust of supersonic jet fighters.

Evidence for the formation of Mach disks in the supersonic exhausts of a McDonnell F-15E Strike Eagle. Image credit: US Air Force/Senior Airman Matthew Bruch