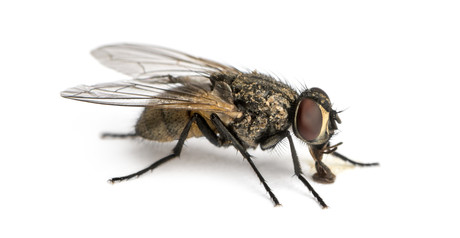 Whether they’re descending on your food and drink or just generally pestering you, flies are a cause of annoyance for many. And that’s not their only vice, as research from Pennsylvania State University found that they may also carry more potent pathogens than suspected.

Flies have been known to play an important role in carrying and spreading diseases, but this study highlights the extent of that threat.

Ana Carolina Junqueira, Professor of Genetics and Genomics at the Federal University of Rio De Janeiro, stated: “This is the first study that depicts the entire microbial DNA content of insect vectors using unbiased methods.”

Using DNA sequencing, researchers studied the microbiomes of 116 houseflies and blowflies from three different continents, and found they carried over 600 hundred different species of bacteria.

Bacteria can be spread through many different body parts of a fly, but the legs were found to be the biggest culprit in the transmission of microbial organisms between surfaces, according to Stephan Schuster, research director at Nanyang Technological University.

He indicated that legs and wings act as “airborne shuttles” to bacteria. “It may be that bacteria survive their journey, growing and spreading on a new surface. In fact, the study shows that each step of hundreds that a fly has taken leaves behind a microbial colony track, if the new surface supports bacterial growth.”

Blowflies and houseflies — both carrion fly species — are often found around faeces and decaying organic matter, meaning they are exposed to very unhygienic environments where they can easily pick up bacteria that could be harmful to humans, plants and animals. However, the flies collected from stables carried fewer pathogens than those collected from urban environments.

Flies and humans live in close proximity to one another, but the study revealed that the presence of humans actually increases the potential for flies to carry diseases.

“It will really make you think twice about eating that potato salad that’s been sitting out at your next picnic,” said Donald Bryant, Ernest C. Pollard Professor of Biotechnology and Professor of Biochemistry and Molecular Biology at Penn State. “It might be better to have that picnic in the woods, far away from urban environments, not a central park.”

Bryant also suggested that although flies are known to carry bacteria, he believes their role has been overlooked in the past.

“We believe that this may show a mechanism for pathogen transmission that has been overlooked by public health officials, and flies may contribute to the rapid transmission of pathogens in outbreak situations,” he said.

For example, the results showed the pathogen Helicobacter pylori on 15 flies collected in Brazil. This pathogen often causes ulcers in the human gut, but Schuster suggested known route of transmission has never considered flies as a possible vector for the disease.

Despite all their negative connotations, flies may have some benefits. The researchers suggested that sterile flies that have not been exposed to any microorganisms could act as an early warning system for diseases in the future. After being released into the environment and recaptured, they would reveal the latent microbiomes present in that area.

“For one, the environmental sequencing of flies may use the insects as proxies that can inform on the microbial content of any given environment that otherwise would be hard or impossible to sample,” said Schuster. “In fact, the flies could be intentionally released as autonomous bionic drones into even the smallest spaces and crevices and, upon being recaptured, inform about any biotic material they have encountered.”

The study was published in Scientific Reports.