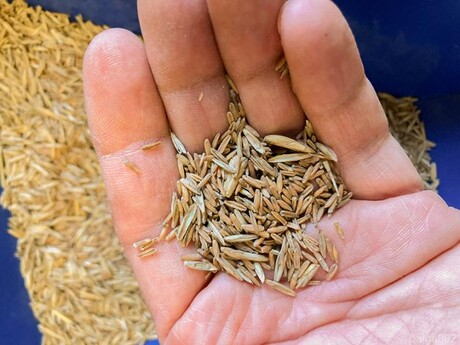 “The Land Institute has been breeding intermediate wheatgrass since 2002. Developed using germplasm provided by The Land Institute in 2011, this variety of wheatgrass is the first to be available for public use,” said James Anderson, a professor at the University of Minnesota.

The new variety, called MN-Clearwater, was produced by crossing seven wheatgrass parents with desired qualities, such as high grain yield and seed size, which are suitable for farmers. Breeders have succeeded in domesticating this perennial crop that provides benefits to farmers and the environment. The MN-Clearwater wheatgrass seed grain threshes freely from the hulls 63% of the time. More information about MN-Clearwater can be found in the Journal of Plant Registrations.

“Because wheatgrass is a perennial, it’s known to be a soil builder. It provides soil cover throughout the year,” Anderson said.

Other benefits of this wheatgrass variety compared to other crops like corn and soybean include less soil loss from the field, fewer chemicals and fertilisers entering the groundwater system, and improved carbon storage. Wheatgrass also provides economic advantages for farmers; as a perennial crop, it uses less fertiliser and machinery than annual crops.

The first registered food product from MN-Clearwater wheatgrass was a beer from Patagonia Provisions. Other products include locally brewed beers and a limited-edition cereal from Cascadian Farm.