COVID-like viruses can survive on meat in freezer 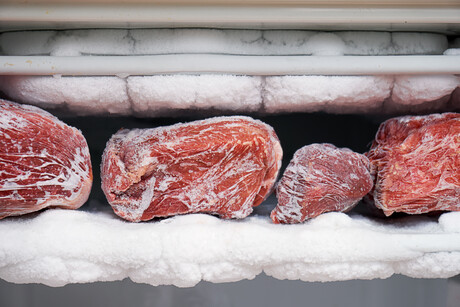 Scientists in American have discovered that viruses that are similar to SARS-CoV-2, the cause of the ongoing COVID-19 pandemic, have the ability to survive on meat products in the freezer. The findings may have implication for routes of transmission.

A trio of researchers from Campbell University, the Texas Tech University Health Sciences Center and the University of North Carolina at Chapel Hill infected chicken, beef, pork and salmon and with surrogate viruses that have similar spikes to the COVID-causing virus in order to assess how COVID-19’s viral particles may behave in the cold. The meat samples were stored in refrigeration (4°C) and freezer (-20°C) temperatures. It was not viable for real SARS-CoV-2 viruses to be used, with used 1 RNA virus with a lipid envelop, and 2 animal coronaviruses, murine hepatitis virus, and transmissible gastroenteritis virus used as surrogates.

After being refrigerated or frozen for 30 days, the researchers found that the viruses on this meat could still be cultured, meaning that they were effectively alive — or as alive as a virus could ever be technically. While the viruses survived to varying degrees depending on the kinds of meat they were frozen on, no samples were left free of the virus after spending a month in the cold.

The scientists noted that research may suggest the possibility of people becoming sick by coming into contact with COVID-infected surfaces and there have been accounts of other coronaviruses making people sick after being transmitted on fresh produce. As such, the frozen meat could provide a way for people to become sick with COVID-19 if they were to touch infected meat and then their face, and it may even be possible to become sick by eating the meat, though it was noted that this is still up for debate as of now. More research will be pursued in the future to gain a better understanding of how SARS-CoV-2 could survive on foods.

The study was published in the Applied and Environmental Microbiology journal.

Researchers looking into alternative sweeteners have found a substance that is low in calories...