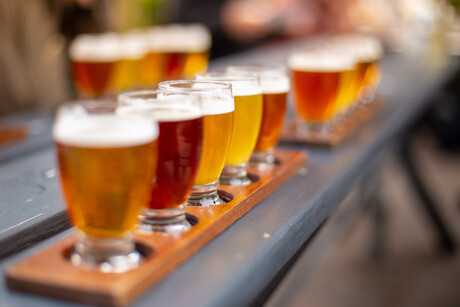 A study published by Portuguese researchers from NOVA University Lisbon suggests that drinking either alcoholic or non-alcoholic beer could be a way to increase the diversity of healthy bacteria in the gut.

Having a more diverse and varied gut microbiome has been associated with people having a low chance of developing chronic illnesses such as heart disease or diabetes. It is also known that the presence of compounds like polyphenols in beer, as well as microorganisms from its fermentation, can have an impact on gut flora diversity.

Published in the Journal of Agricultural and Food Chemistry, the study involved two groups of men, who drank a small bottle of either alcoholic or non-alcoholic lager daily for 30 days to assess the impact that it had on the gut biome. At the end of the trial period, it was found that the bacteria in the participants’ gut microbiome (regardless of the sort of lager consumed) was more diverse and that there were higher levels of faecal alkaline phosphatase, which indicates an improvement in intestinal health. There were also no noted changes in weight, body mass index, heart health or metabolism. This suggested to the scientists that drinking beer could be a useful tool for increasing gut health and reducing the chance of being affected by certain chronic diseases.

Previous studies had showed different results, with the non-alcoholic beer showing positive impacts on gut bacteria but not the alcoholic beer. However, the researchers suggest that this may be due to the way the experiments were set up and the participants. Further research with a larger and more diverse field of participants will be needed as a means of assessing the ability of beers in general to increase gut health.

Of course, the scientists caution against considering a trip to the pub as a vigorous activity and noted that non-alcoholic beer is inherently a healthier choice, as the safest level of alcohol consumption is zero. Still, the research suggests that having a small bottle of beer each day could be one way to a healthy gut.