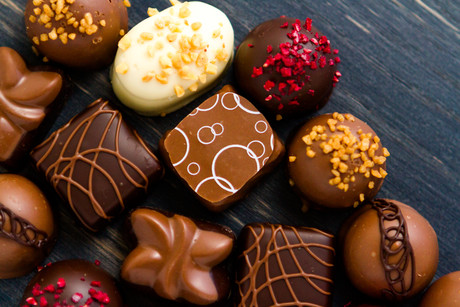 Theobromine is an alkaloid, a family of compounds that are produced by the cacao plant. Chocolate, tea and coffee contain amounts of theobromine. Theobromine chemically resembles caffeine and has a stimulating effect on the brain, with the combination of theobromine and caffeine found in chocolate believed to stimulate the lift in spirits many feel after consuming chocolate. Chocolate also contains antioxidants, which help prevent damage to cells. While raw cacao beans contain significant amounts of antioxidants, such as epicatechin and gallic acid, the compounds are largely removed as the beans are processed to become chocolate, with only trace amounts remaining.

Chocolate is also believed to act as a mild aphrodisiac, as it contains a compound called phenethylamine, which causes brain cells to release dopamine, a neurotransmitter with a feel-good effect. However, ingesting phenethylamine cannot influence mood, as the body breaks it down before it can reach the brain. The combination of sugar and chocolate’s high fat content is believed to cause chocolate cravings, as it activates the brain’s reward centres. However, despite its varied chemical compounds and their benefits, chocolate is best enjoyed in moderation.

Yokogawa to supply DCS for power plant in Turkmenistan