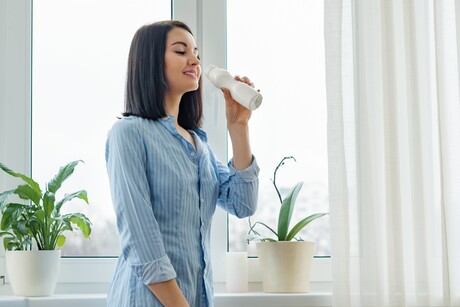 A team from Canada’s National Institute of Scientific Research (INRS) is developing a plant-based probiotic drink that is high in protein and is easy to digest. The fermented beverage has been enriched with pea and rice proteins to achieve a nutritional quality comparable to casein, an animal protein found in milk.

The combination of pea and rice proteins helped counterbalance essential amino acid deficiencies through complementarity but plant proteins are harder to digest compared to animal proteins.

The solution that the INRS team developed is the addition of rice and pea proteins at the fermentation stage. By adding the proteins at this stage, they are predigested by lactic acid bacteria (LAB), which results in the formation of peptides (protein fragments) resulting from the breakdown of proteins during fermentation, thereby facilitating their absorption during digestion.

The study, carried out in collaboration with Bio-K+, used a specific formulation containing LAB, whose probiotic functions have been scientifically proven and licensed by Health Canada.

The research findings have been published in the Journal of Food Science.

Researchers have developed a profiling tool that ranks thousands of foods and lets consumers and...