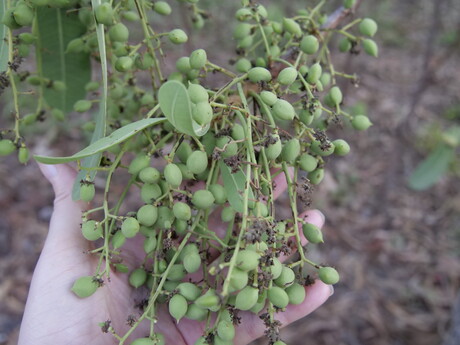 Green plums (Buchanania obovata), Indigenous fruits which were one of the earliest known plant foods eaten in Australia, could be the next big thing in the bush foods industry. A research team from the University of Queensland has found that green plums contain one of the highest known folate levels of any fruit on the commercial market.

“This is really exciting because folate is an important B-group vitamin, and what’s great about the green plum is that the folate is in a natural form so the body absorbs it more easily than in a capsule,” Professor Yasmina Sultanbawa said.

Folate helps cells work and tissues grow in the body, and is regarded as essential for the healthy development of the foetus during pregnancy. Sultanbawa’s research time is performing a detailed study of the nutritional characteristics of the green plum.

“The green plum is sometimes called ‘wild mango’, and grows abundantly across the far north of Australia. There is recent evidence discovered in West Arnhem Land which shows the green plum was eaten by Aboriginal people as far back as 53,000 years ago,” Sultanbawa said.

With funding from the Australian Research Council’s Industrial Transformation Training Centre’s program for Uniquely Australian Food, researchers are working with Aboriginal communities in East Arnhem Land and Delye Outstation in the Northern Territory to research the green plum.

Selina Fyfe, a food scientist undertaking a PhD on the green plum, said its sensory qualities are outstanding.

“It’s probably one of the most delicious foods I have ever tasted — it’s very sweet, a bit like stewed fruit. The research has already found the green plum’s flesh is high in protein, dietary fibre, folate, potassium and is a good source of magnesium, calcium and phosphorous,” Fyfe said.

The seed of the green plum is also rich in dietary fibre, iron and vitamin B9. The green plum belongs to the family Anacardiaceae, which contains other commercialised fruits, including mango, cashew apple and pistachio nuts.

“The green plum is a sweet fruit that consistently rates highly in the consumer taste tests we’ve run in Brisbane and could one day be as popular as table grapes. A lot of people don’t know about the green plum, even within the bush foods industry. This is a wild-harvested, seasonal fruit that typically ripens after the first rains of the wet season in late November/early December,” Sultanbawa said.

Green plums are eaten raw from the tree or as dried fruit; the plum’s flesh and seed can also be mashed into an edible paste. The fruit was traditionally used as food and medicine in Aboriginal communities across the Top End of Australia and was popular with children and the elderly.

“The green plum has so much goodness, it could one day help with dietary issues like the triple burden of malnutrition — undernutrition, obesity and micronutrient deficiencies — known as hidden hunger,” Sultanbawa said.

The Arnhem Land Progress Aboriginal Corporation performed a trial harvest of the green plum in 2020.

“Our collaborators at the Aboriginal-owned Gulkula nursery in Gove, East Arnhem Land, have only recently successfully propagated the green plum — and we believe this is the first time the plum has been propagated anywhere in the world,” Sultanbawa said.

Researchers from UQ are working with researchers in Germany to determine the green plum’s chemistry, and its acids and sugars, to provide a more detailed nutritional profile of the fruit.

“Once we get the scientific evidence about its nutritional value, chemical composition, the different maturity stages and best time to harvest, then we can work with the communities to get it into the market as a commercial product,” Sultanbawa said.

Legal and social science researchers, and other partners in the ARC Centre for Uniquely Australian Foods, will work with Indigenous communities to undertake enrichment planting and develop enterprises that ensure Indigenous community ownership and control.