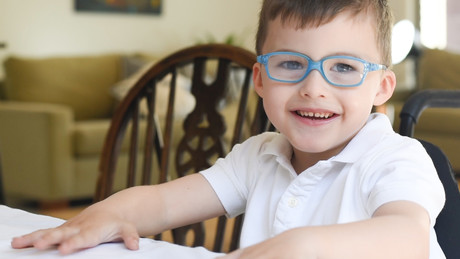 Swallowing disorders are not limited to the elderly alone, and the case of a young Brisbane boy affected by dysphagia has highlighted the importance of recognising the signs and seeking treatment.

Dysphagia is a condition in which a person has difficulty or discomfort swallowing, and it can lead to dehydration, malnutrition, choking and even death. Although dysphagia does primarily affect the elderly, it is also connected to conditions such as stroke, dementia and Parkinson’s disease, head and neck cancers, multiple sclerosis or cerebral palsy, according to Speech Pathology Australia (SPA).

Shortly after he turned two years old, Brisbane-based Aston Capper was diagnosed with cerebral palsy, which can affect the muscles that open and close the mouth, move the lips and tongue, and control swallowing. His parents Morgan and Brenton noticed he was exhibiting symptoms such as gasping when drinking, difficulty sleeping and weight loss.

After seeking advice from a speech pathologist, Aston was encouraged to try a thickening powder called Instant Thick, manufactured by Flavour Creations.

Founder and CEO Bernadette Eriksen created the company 20 years ago to help people suffering from these conditions. She has recently won several awards for her contributions to the industry, including the 2017 Telstra Queensland Business Woman of the Year, the 2017 Telstra Queensland Entrepreneur Award and the Greater Brisbane Woman in Business of the Year Award 2017.

A few weeks after trying this thickening powder, Aston’s mother reported that the mere 250 mL he was able to drink before being diagnosed increased to up to a litre a day with Instant Thick.

“We could monitor Aston safely processing his fluids once they were thickened,” Morgan said. “The increase in fluid meant we could do more therapy as he had a lot more energy to do more things because he wasn’t so dehydrated all the time.”

Eriksen explained, “It’s stories like Aston’s that bring it all home” and it “reminds us that swallowing disorders can impact people of any age.”

She continues by highlighting the prevalence of dysphagia; one in 17 people will develop some form of dysphagia in their lifetime, while 1 million Australians have a swallowing difficulty. However, many people are unaware that they have the condition. Symptoms to look out for include coughing, gagging or choking when eating and drinking.

Morgan praised the help of Eriksen and the Flavour Creations products in helping her son, and his story has been shared as part of Swallowing Awareness Day.

“Many people with dysphagia suffer in silence, not knowing that they have the condition and that help is available,” Eriksen stated.

For more information on the condition, visit www.speechpathologyaustralia.org.au.