The science of sausage-eating satisfaction 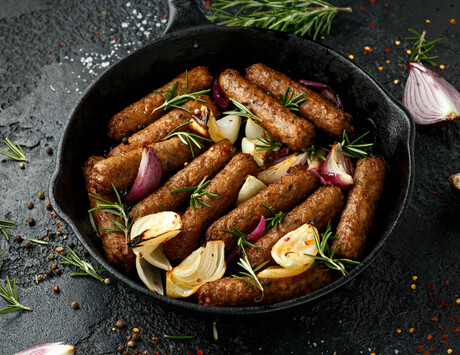 Plant-based sausages aren’t the wurst — but they could be better, say physicists from a research institute in Germany. Newly published research into the experience of eating different sorts of sausages has used physics to explain why meat-based sausages have that satisfying meat ‘crack’ and how vegan sausages may be able to adjust their ingredients to produce this experience too.

Scientists from Germany’s Max Planck institute for Polymer Research have conducted research on the topic, relying on tensile experiments, and rheology and tribology in molecular models to examine, test and compare the physical qualities of meat, vegan and vegetarian sausages.

While vegan sausages are often fairly good analogues for their meaty brethren in terms of appearance and taste — they can be fairly close to the real deal in these ways — they are unable to match meat sausages’ texture and distinct feeling of crispness.

The research postulates that this is due to the molecular qualities of the component ingredients, with the blend of animal muscles and fats creating a unique sensation for traditional sausages. The vegan sausages use various proteins and fats to act as a facsimile for those found in animal fibres but they act differently when cooked compared to animal products.

One of the study’s co-authors, Thomas A Vilgis, said that the reason why a vegan sausage has a different mouthfeel and eating experience is down to the molecular qualities of its ingredients.

“We are taking a closer look at the proteins as well as the sequence of amino acids, which we understand as a ‘code’ from which we can read certain properties to better understand the behaviour of the sausages in the mouth when they are consumed. Thus, fundamental differences in the molecular structure and mouthfeel become immediately apparent.”

The paper notes that various ingredients of vegan sausages should be substantially altered in order to create a more satisfying experience, such as using solid fats instead of liquid ones or using proteins that are more fibrous in nature than globular.

Further research into these characteristics may result in the development of vegan sausages that offer the same eating experience as meat ones.

“We’re working directly at the interface between basic science and technological application,” Vilgis said. “With these methods, it is possible to make predictions in how the physical properties of an alternative sausage can be improved — and make targeted developments.”

The study was published in the Physics of Fluids journal.