Origins of the funky smell of cheese 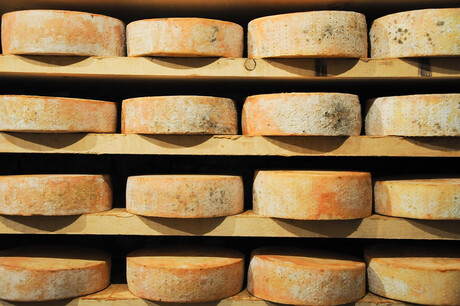 Researchers have found the distinctly funky cheese smells come from fungi communicating with bacteria, and how they communicate determines what the cheese has to offer.

The discovery, published by a team at Tuffs University, found common bacteria essential to ripening cheese can sense and respond to compounds produced by fungi in the rind and released into the air.

The study said this process enhances the growth of some species of bacteria over others.

The composition of bacteria, yeast and fungi that makes up the cheese microbiome is critical to the cheese’s flavour and quality, so figuring out how that can be controlled or modified adds science to the art of cheesemaking.

Senior researcher Benjamin Wolfe said humans had appreciated the diverse aroma of cheeses for hundreds of years, but how these aromas impact the biology of the cheese microbiome had not been studied.

“Our latest findings show that cheese microbes can use these aromas to dramatically change their biology, and the findings’ importance extends beyond cheesemaking to other fields as well,” Wolfe said.

An example of microbial VOC is geosmin, which can often be smelled after heavy rain in forests.

As bacteria and fungi grow on ripening cheeses, they secrete enzymes that break down amino acids to produce acids, alcohols, aldehydes, amines and various sulfur compounds.

In contrast, other enzymes break down fatty acids to produce esters, methyl ketones and secondary alcohols.

The way these enzymes break down the acids determines the cheese’s smell and taste.

But when certain VOCs were released near the cheese, the bacteria began to eat some of the VOCs, changing the cheese’s composition.

Co-author of the study Casey Cosetta said the bacteria are able to eat what we perceive as smells.

“That’s important because the cheese itself provides little in the way of easily metabolised sugars such as glucose. With VOCs, the fungi are really providing a useful assist to the bacteria to help them thrive.”

The researchers said there are direct implications of this research for cheese producers around the world.

“When you walk into a cheese cave, there are many VOCs released into the air as the cheeses age. These VOCs may impact how neighbouring cheeses develop by promoting or inhibiting the growth of specific microbes, or by changing how the bacteria produce other biological products that add to the flavour,” the study said.

A better understanding of this process could enable cheese producers to manipulate the VOC environment to improve the quality and variety of flavours.

Wolfe said the implications of the research could even extend much further.

“Now that we know that airborne chemicals can control the composition of microbiomes, we can start to think about how to control the composition of other microbiomes. For example, in agriculture to improve soil quality and crop production and in medicine to help manage diseases affected by the hundreds of species of bacteria in the body,” Wolfe said.