Has infant formula been causing Salmonella for 13 years? 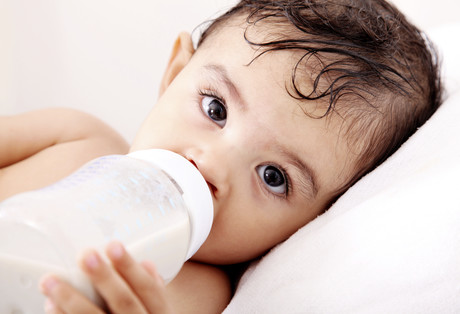 39 infants in France, Spain and Greece ill after consuming formula processed by Lactalis.

Mothers protect their children from a number of threats, but they never expected that their infant formula could be one of them.

Late last year, French processing company Lactalis — one of the world's largest producers of dairy products — was pinpointed as the vehicle of Salmonella Agona (S. Agona) infection, which has affected 39 infants below one year of age since August 2017.

After the Pasteur-based French National Reference Center (CNR) alerted authorities about the unusually high number of infant cases of Salmonella, authorities carried out an epidemiological investigation and confirmed the outbreak in December.

37 of the 39 documented cases have been in France, but the international spread of the disease was caused by the circulation of seven brands of infant powdered milk manufactured in Lactalis's factory, including Milumel, Pepti Junior and Picot. A Rapid Outbreak Assessment (ROA) by the European Food Safety Authority (EFSA) and the European Centre for Disease Prevention and Control (ECDC) stated that whole genome sequencing (WGS) has also confirmed one related case in Spain and one in Greece.

Other EU countries also reported S. Agona in 2017 (four in Belgium, two in Germany and one in both Norway and Sweden), but the biomedical trait that was characteristic of the outbreak was not present in the isolates from these countries.

The part of the plant responsible for the outbreak has been shut down and the company has recalled 12 million tins of formula from over 80 countries. However, Lactalis Chief Executive Emmanuel Besnier stated that the returned products did not even amount to half of total volumes.

Since 15 January 2018, the recalled products have been distributed to 13 European Union countries (including Belgium, Cyprus, France and Greece) and to 54 third countries. The majority of the products have also not passed their expiry date, meaning it is still available for consumption; the potential for more cases to be reported cannot be ruled out entirely.

According to the ROA, the precautionary measures put into place since the outbreak was confirmed should limit the risk of further infection, but “the detection of new cases cannot be excluded”.

Taking into account the most recent outbreak, over 200 babies in France have been contaminated with S. Agona since 2005. Using new technology, the Pasteur Institute confirmed that an outbreak in 2005 which sickened 141 was caused by the same strain as the current outbreak.

The origin of the 2005 outbreak was believed to be a factory in Craon, the same one that Lactalis took over in 2006. The bacteria likely remained in the premises over the last 13 years and could have been the cause of numerous other cases of S. Agona contamination. Besnier said recent renovations may have facilitated the 2017 outbreak.

"It can not be excluded that babies have consumed contaminated milk over this period (2005–2017)," Besnier said.

The company's internal tests revealed traces of Salmonella at the factory in August and November last year, but it supposedly was not found in any of its products and was therefore not deemed to be a public health threat. Besnier criticised tests performed on final products in 2017 that should have detected if the bacteria was present.

"If the analysis of end products had revealed the presence of Salmonella Agona, we would of course not have marketed the products and we would have avoided the crisis.”

Besnier continued by stating the outbreak would cause significant financial costs to the company, especially considering the indefinite repeal of its export licence. He labelled it “the biggest crisis I’ve ever had to face as a boss”.

However, the Association of Victims of Salmonella Contaminated Milk (AFVLCS) claimed that about another 10 infants have been contaminated, and are angered they have not been linked to Lactalis.

The AFVLCS stated "this is a health scandal of unprecedented scale" and it "implies that the victims could have been much more numerous".

Although Besnier insisted the company is cooperating with the authorities' ongoing investigation, many have argued that greater transparency is needed going forward. AFVLCS President Quentin Guillemain claimed that any compensation offered by Lactalis would not be warmly received by the families of those affected.

"It seems that Mr Besnier is quick to distribute his money to the victims so that they keep quiet," he said. "Well, I tell you, we will not be silent."

Not only is the victims' association targeting Lactalis with multiple law suits, but it also intends to highlight the role of French supermarkets in the spread of the disease. It was revealed that Leclerc, Auchan, Carrefour and Systeme U did not remove Lactalis products from their shelves even after they were recalled.

Working alongside the AFVLCS, non-profit campaigning organisation foodwatch agreed, arguing that the manufacturer, supermarkets, laboratories and public authorities have "failed the consumer". It suggests there were 12 breaches of the law, and plans to press charges for marketing a product dangerous to health, failure to warn and withdraw the products, endangering others, committing an involuntary act on the physical integrity of a person, and exporting a food product harmful to health to another European Union country.

The decision to take legal action is prompted by the fact that many food issues in the past have been overlooked. Instead, Ingrid Kragl, the director of information of foodwatch, said "The penalties should be deterrent and exemplary."

The Pasteur Institute is carrying out a multicountry WGS analysis to determine how the milk was contaminated, and identify and address weaknesses in the production process.

To prevent further infections, precautionary measures should be taken when preparing infant formula, such as disposing of the brands responsible for the outbreak, washing hands and ensuring prepared milk is consumed within two hours.

If children begin showing symptoms such as diarrhoea and vomiting, it is important to take them to their healthcare provider. Any confirmed cases of S. Agona should be reported to EPIS-FWD (Epidemic Intelligence Information System for Food- and Waterborne Diseases and Zoonoses).