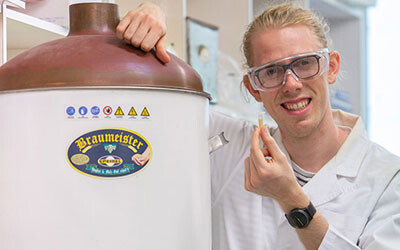 The new method cuts down the ingredients and scale needed to perform experiments on the beer brewing process.

University of Queensland PhD candidate Edward Kerr discovered the method when he completed a beer brewing experiment for a paper.

“I was looking at barley protein changes during the mashing stage of beer brewing, when one of the paper’s reviewers asked if the changes were caused by temperature or time spent mashing the barley,” Kerr said.

“It was a good question, but to find out I’d need to brew all over again, with an instrument that would hold at least 23 litres of brew, including five kilograms of malt for each brew — it would have taken another three months,” he said. “To be honest, I was feeling a little lazy, so decided to see if I could do the same experiment on a much smaller scale.

“The result was surprising — I found that I could replicate the beer brewing process using only a single barley seed in a 1.5 millilitre tube.”

Kerr said these kinds of experiments would previously have occurred at much larger, ingredient-intensive scales of about 50 to 100 L.

“This is because it has always been thought that testing how barley varieties perform in brewing had to be done at a similar scale to actual beer production,” he said.

“When breweries are trying out a new beer recipe they also want to make enough of it to be able to easily test it by drinking. But this discovery brings together large-scale industrial beer producers and research scientists, who are used to high precision and sensitivity.”

“Barley breeding focuses on increasing productivity and resistance to stresses such as heat and disease, but doesn’t take into account the quality of the barley until late in the process,” Dr Schulz said.

“And that’s a pretty challenging thing to test for, simply because of the scale previously required. Now that we only need a tiny amount of malted barley, we can quickly and easily ensure new varieties are of high quality.” 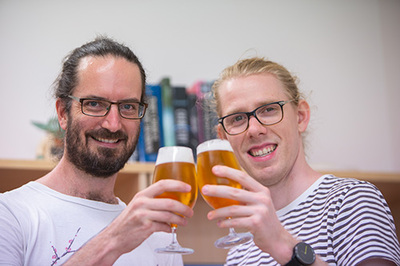 The researchers said this could encourage breweries to be adventurous with their brewing conditions and may very well lead to new styles of beer.

“Hopefully it’ll also help ensure we have a supply of high-quality Australian barley into the future, given ongoing stresses of drought and climate change," Dr Schulz said.

“We’re also hoping to use this approach in undergraduate practical courses in chemical engineering associated with the upcoming UQ Nanobrewery — it’s a great opportunity to bring process experimentation and optimisation into the student experience,” he said.

“But while 1.5 millilitres is definitely more convenient, quicker and cheaper, it’s a little small for a refreshing after-work beer.” 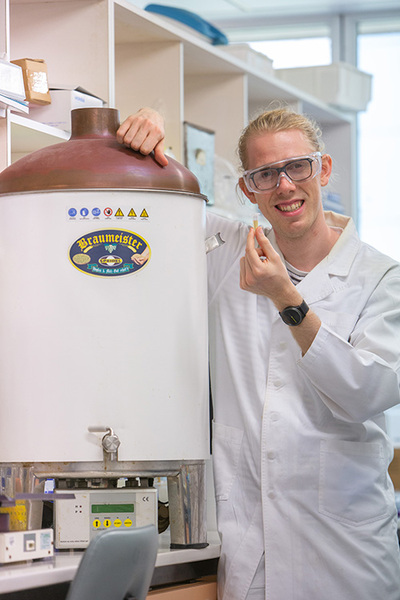 Images supplied by the University of Queensland.

Some plant-based burgers smell like the real deal when they are cooking, though other products...

Enzyme may be a major driver of pre-eclampsia

Meat analogue made from fermented okara

Fugro partners with Nexxis to operate robots via satellite

Ampcontrol engineers honoured in Engineer of the Year Awards