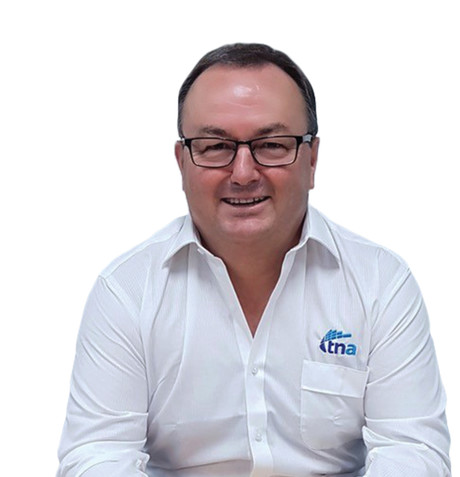 tna has named Jonathan Rankin as Chief Executive Officer (CEO), promoting him from his role as Chief Sales Officer (CSO).

Rankin has three decades of experience in the food industry, including various global management roles at tna from 1993 until 2003, and his recent return to the company to oversee its global sales division. He also previously served as general manager for food processing specialist Marel, where he was responsible for the successful growth of the company’s Oceania operations.

In his new role, Rankin will draw on his experience to lead tna’s day-to-day operations, while focusing on the implementation of new processes that will improve its operational efficiencies and growth.

Since it was founded in 1982, tna has grown into a global leader of food processing and packaging solutions for a wide range of industries, including snacks, confectionery, and fresh and frozen produce. It now operates out of 30 sites and employs over 500 people globally.

Alf Taylor, tna co-founder and Managing Director, noted Rankin’s role in the company’s recent growth. “Over the last 36 years, we’ve added some truly amazing people to our team, gained a fantastic bunch of customers and established ourselves as a global leader on the snack food manufacturing market,” he said. “Jonathan celebrated some of our most important milestones with us and played an instrumental role in our growth. We were thrilled when he decided to come back and can’t wait to see just how much further he’ll take the business.”

The United Kingdom and New Zealand have reached an agreement in principle for a free trade...