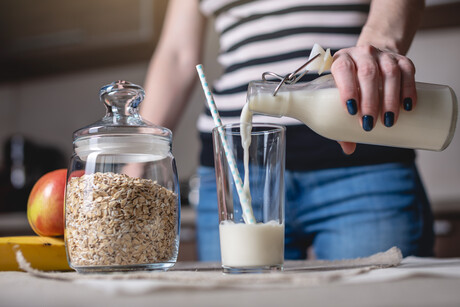 Oat milk has become the plant-based milk of choice in the UK, according to the latest research from Mintel.

Sales of oat milk almost doubled between 2019 and 2020 in the UK as Brits spent around £146 million (AU$246m) on the non-dairy milk substitute in 2020. By contrast, consumers spent £105 million (AU$199m) on almond milk in 2020, resulting in oat overtaking almond to become the nation’s number one selling vegan milk.

“Oat milk was the main beneficiary of the accelerated demand in plant-based milk during 2020, overtaking almond milk as the top-selling plant-based milk. Oat milk’s previous robust growth has attracted a lot of innovation to the segment including barista-style varieties. The rapid sales growth of plant-based milk has brought about new product development from established players and new entrants alike.”

“While almost 90% of Brits use cow’s milk, usage continues to be lower amongst younger Brits than older age groups, as it faces intense competition from plant-based varieties. If they retain their plant-based milk habit as they age, this stands to drive usage across the population upwards over time, fuelling long-term growth for the plant-based milk category.”

Filtered milk, which stays fresher longer than standard milk, has also increased 32% in the UK between 2019 and 2020, with UHT milk also seeing a surge in usage, up from 14% in 2020 to 20% in 2021. Overall, chilled milk (milk that needs to be kept refrigerated) remains the nation’s favourite milk format with usage standing at 92% of Brits.

“Filtered milk has benefited hugely as people’s shopping habits changed during the pandemic. A tendency to shop less often meant more people were willing to pay for milk that stayed fresh for longer. The pivotal question for longer-life milk options is whether more frequent shopping habits will resume even as a permanent shift towards more homeworking is predicted. If commuting levels increase, then top-up shopping should be boosted — potentially making fresh milk more appealing and filtered milk less so,” Price concluded.

Definitions concerning gene technology are to be updated to be more timely and clear, and you are...