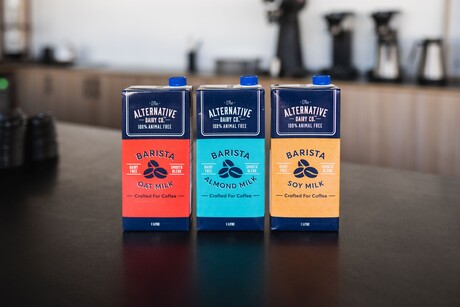 The Alternative Dairy Co has reported its strongest sales on record for its home-grown range of barista plant milks, despite the negative impact of COVID-19 lockdowns on the nation’s cafe businesses.

The company said that this has been fuelled by a shift in consumer preference towards locally made products and a growing taste for plant milks by Australia’s coffee drinkers — 55% of whom prefer their morning brew at their local cafe and overwhelmingly want their coffee white.

In recent years dairy-free milk alternatives have continued to surge in popularity, with almond milk officially overtaking soy as the most requested dairy alternative in 2019, according to the 2019 Square Australian Coffee Report. Almond milk is tipped to continue to grow, but it is oat milk’s dairy-like taste and creamy texture that has industry pundits predicting it’s the plant milk to watch over the next five years.

The Alternative Dairy Co is backed by Sanitarium Health Food, an Australian owned company that launched its dairy-free milk brand So Good in the 1980s.

According to Steve Beams, General Manager of Sales at Sanitarium, the reason people were increasingly turning to plant milks was two-fold.

“People have long been attracted to the health benefits of plant milks, but a growing number of socially conscious consumers are now also seeking food and drinks with stronger sustainability credentials. In coffee, the decision to switch from dairy to a plant milk is now easy too, because it no longer represents a compromise on the coffee experience,” Beams said.

Beams said that while this trend is adding momentum to the uptake in plant milk, it also gives The Alternative Dairy Co a strong market advantage, particularly in competing with some of the global dairy-free milk brands.

“The Alternative Dairy Co source Australian almonds from the Murray-Darling region. Our supplier Select Harvests is committed to sustainable agriculture and has implemented some innovative solutions at their orchards to minimise the use of water and energy and support bee health. All our oats are locally grown too,” he said.

The Alternative Dairy Co first entered the cafe scene in 2018 with its soy and almond barista milks. The brand added oat milk to its production line in 2019.