With more than 5000 employees and the takeover of the Steggles brand, Baiada Steggles is now Australia’s leading poultry company. The company has recently upgraded the evisceration rooms at its Mareeba plant in Far North Queensland and at its largest production plant in Beresfield on the outskirts of Newcastle in NSW.

Baiada’s Allan Forner and Lab45’s Jason Grant took up the reins of project management, along with onsite technical assistance from the Marel Stork group. Marel Stork is a global provider of advanced food processing equipment and specialises in the fish, meat and poultry industries.

The initial phase of the project involved Lab45 fitters and technicians overhauling an existing evisceration system at Baiada’s Pendle Hill plant in November of 2010. This phase included stripping down and then rebuilding eight machines over a three-week period.

Lab45 then facilitated transportation via semitrailers and road trains from Sydney to Mareeba. The trucks needed to bypass Dubbo and much of Western NSW during the initial stages of rising waters of the recent devastating floods. The trucks ploughed through more than 300 km of water and the journey took an extra 600 km to complete due to the state of the roads.

The Mareeba project included the fabrication of a five-metre cleated conveyor with the help of Victor Jeries from Brendma Belting Australia, stainless steel chutes, an inspection platform and rerouting approximately 100 metres of four-inch vacuum line in the ceiling space of the plant.

The removal of the redundant evisceration line at Mareeba and reinstallation of the new system was completed over 14-16 January. The existing equipment was removed in approximately 8 hours by a team of Lab45 riggers, dogmen and fitters.

The project utilised a franner crane, scissor lifts, forklifts, Genie lift and lifting frames to complete the installation. Lab45’s General Manager, Miles Pepperall, commented: “Not one piece of material for the project was missed by the Lab45 team. The installation ran smoothly despite the unusual circumstances of stainless and other suppliers across most of Queensland being cut off during the later stages of the floods.”

The team also used customised track stands and lasers to determine track heights for the 130-odd metres of overhead Stork conveyor matrix that was installed into the plant. The works were completed by a team of twenty Lab45 riggers, fitters, welders and electricians. 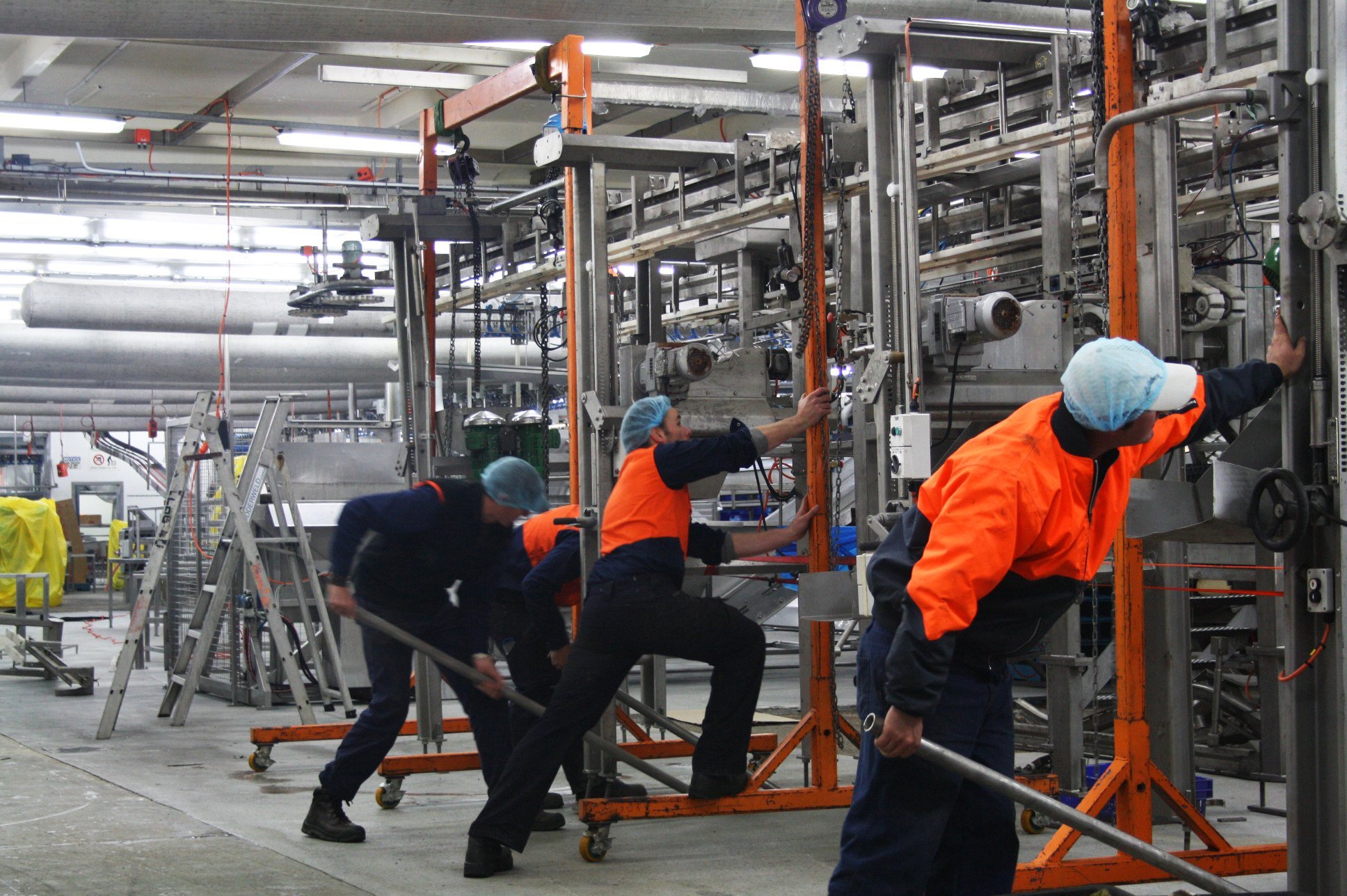 The system has run successfully since commissioning. Both Baiada and Stork had technical personnel on site to oversee Lab45’s installation. Baiada’s Joe Bonello remarked that he was pleased with the installation and the start-up.

Bonello remained behind in Mareeba for the first four days of production to monitor and complete commissioning. Upon completion, the Lab45 crew rapidly packed up their gear and their 20-foot shipping container (weighting 9 tonnes) ready for the next installation at Beresfield 2400 km away. This project was due to be completed only two weeks later. 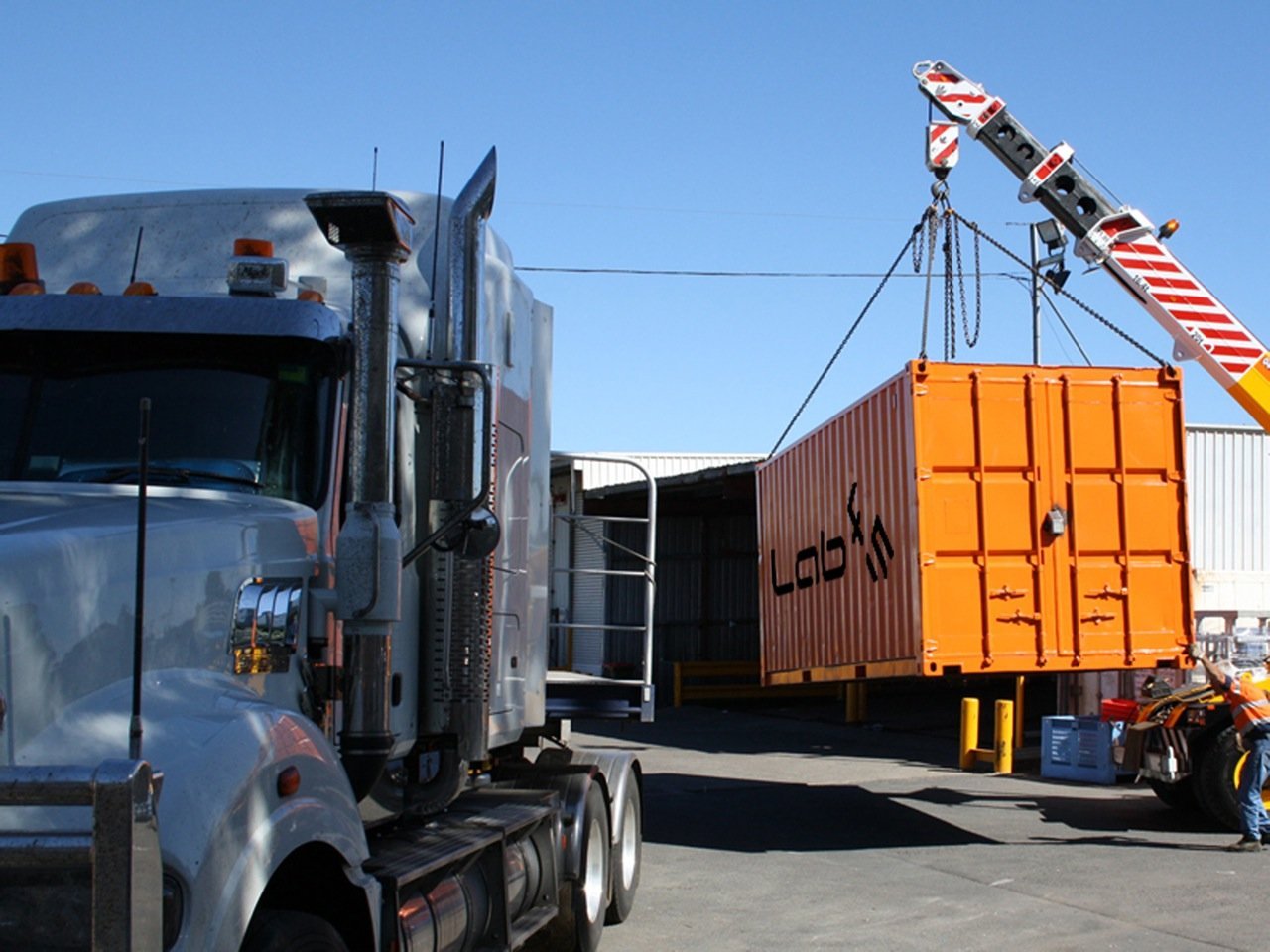 This project involved the removal of the plant’s ageing evisceration system and the installation of a completely new system purchased from Marel Stork.

The preparation works were completed by Lab45 in early January and included rerouting six four-inch stainless steel vacuum systems and running two new lines. During this time Lab45’s team also installed a steel work matrix in the plant’s roof. This matrix was ready for the installation weekend where the machines and overhead conveyor system were suspended via stainless steel droppers. Lab45 also conducted demolition work where a number of walls within the plant were removed to make access for equipment to be brought in and out of the plant and space for the new layout.

Lab45 supplied 23 fitters, welders and technicians to complete this installation. The mechanical installation was successfully completed within 60 hours and production at the plant ran on schedule after the shutdown.

The two evisceration systems installed for Baiada came off the back of continued ad hoc projects including the installation of a Stork MX cut-up line in September and a Stork KFC machine in October 2010.

To improve safety during food processing, a durable coating has been developed to prevent...