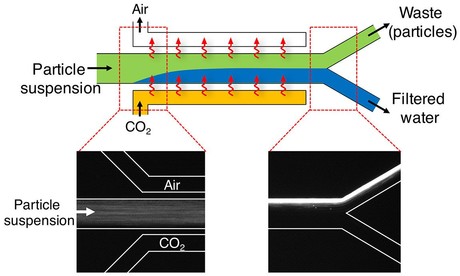 A low-cost water treatment system has been found to remove particles 1000-fold more efficiently than conventional microfiltration systems. With no physical filters or membranes that can clog or require replacement, the low-energy system uses bottled carbon dioxide as the only moving part (besides the pump responsible for the flow).

Because most contaminants have some amount of surface charge, the electric field is an effective way to strain them from water. The researchers’ device takes advantage of this electric sorting by drawing the contaminants to one side of the flow and then splitting the water into two channels. One path carries water containing the contaminating particles and the other holds clean water.

To maintain the electric field, the researchers made the channel walls out of silicone that is permeable to carbon dioxide. Pressurised carbon dioxide diffuses through one wall of the channel and permeates out the other side. If the system is encapsulated the CO2 could be recovered for re-use.

While only a lab-scale system has been built so far the researchers are confident it could be scaled up to hundreds of litres/hour.

The research has been published in Nature Communications.

Image: Researchers at Princeton University have found a way to clean particles from water by injecting carbon dioxide into a water channel. The gas changes the water's chemistry, which causes particles to move to one side of the water depending on their chemical charge. By taking advantage of the motion, the researchers can split the stream of water and filter out suspended particles. (Graphics courtesy of the researchers, Princeton University).