Reducing energy and water usage in continuous-process cooking and cooling

The continuous-process cooking and cooling method for pasta, rice and vegetables has experienced continual improvements over the past four decades in the reduction of energy consumption, through improved system designs and streamlined automation. Recent technological advances have made significant improvements in reaching critical energy- and water-efficiency levels.

The first generation of continuous-process cooking/cooling systems used conveyors to move food products through the processes. Cookers and coolers are only as good as their ability to precisely control the product’s exposure to time and temperature parameters throughout the processes. Conveyor-based systems, however, are prone to variable production rates, which introduces variations in product temperature resulting in inconsistent product quality.

These conveyor-based systems have been superseded by rotary drum continuous-process cooker/coolers, which use an auger method to move food products through a water-filled drum. Considered the industry standard for continuous-process cook and chill methods, rotary drum cooker/coolers have significantly improved the processing of pasta, rice and vegetables. 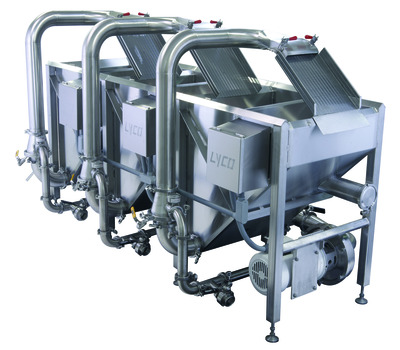 These improvements have ensured more uniform processes and allowed cookers and coolers to handle higher throughputs. Step-blanching, for example, enables incremental temperature increases throughout the process. Gentle mechanical agitation occurs as the food products progress through the cook and chill processes. A system called Hydro-Flow applies a combination of air and water injection which physically and buoyantly supports heavier loads, evenly distributing food products in cookers and coolers.

The benefits from these automated process technologies have also minimised energy and water consumption. Compared to batch systems and conveyor-based cooker/coolers, the latest improvements in rotary drum continuous-process cooker/coolers enable them to process the same volume of pasta, rice or vegetables in less time, using significantly less energy to heat the water required for the processes. Monitoring energy and water usage and managing process systems in these rotary drum cookers and coolers has played an important role supporting sustainability efforts in food processing plants.

With conventional rotary drum continuous-process cooking, the cooker is filled with ambient-temperature (approximately 18°C) water and heated to 93-96°C. In the processing of pasta, rice or vegetables, the water needs to be continually heated to compensate for the constant addition of ambient-temperature product. This requires energy.

Additionally, because water is absorbed into pasta and rice during cooking, ambient-temperature make-up water needs to continually be added into the rotary drum. This adds to the heat load requirements of the cooker. This also requires energy.

During a process run of pasta, rice or starchy vegetables, which may continue for 20 continuous hours, as much as 37 litres of water can be overflowed per minute to reduce the build-up of starch in the water. This means an equal amount of make-up water needs to be added. The volume of overflow and make-up water varies depending on the size of the cooker, and the type and volume of pasta, rice or vegetables being run.

The overflow water is discarded as wastewater and takes the 93-96°C heat energy out along with it.

For every litre that comes out of the cooker at 93-96°C as overflow, a litre of make-up tap water at approximately 18°C needs to be added. The cooker, then, has to heat that water back up to 93-96°C to continue the cook process. This, too, requires energy.

In essence, not only is the overflow heat energy from the cooker being wasted, new energy now has to be added to reheat the water in the cooker to 93-96°C.

The latest technology in continuous-process rotary drum cooking is now capturing and re-using the heat from the overflow water. Instead of being put down the drain, the overflow water is moved to an adjacent storage tank where it is pumped through a heat exchanger. The heat is transferred from the hot overflow water to a reservoir of ambient-temperature make-up water before it is put into the cooker.

Using this process, the make-up water can reach 51°C, considerably higher than the 18°C tap-originated make-up water used in all prior continuous-process cooker systems. This significantly reduces the heating load requirements of the cooker.

A sizable difference in energy savings can be realised when heating water to 93°C from a starting point of 51°C, rather than from 18°C.

Additionally, the starch-laden overflow water, which has previously been discarded, is then screened to remove the particulates and re-used as make-up water to compensate for product absorption, providing significant water savings.

Energy recuperation from the quench system

In rotary drum cooking and cooling, the pasta, rice or vegetables come out of the cooker at 93-96°C. The product then immediately goes into a chiller where it is cooled in 1-4°C water. Initially, the water put into the chiller is tap water with a temperature of about 18°C. To bring the chiller’s water temperature down to the range needed for cooling product, energy has to be expended.

As hot food products are released into the chiller, the water has to be continually cooled to take the heat out of the product and bring its temperature down to a safe range quickly, to reduce the potential of bacterial growth. This requires energy.

Bacteria predominantly grow in an environment that is between 5°C and 60°C. During the cooking process, raw ingredients are brought up past 60°C as quickly as possible to the final cooking temperature, thus minimising the time that food products can be influenced by bacterial growth. The same is true on the other end of the process line, with the cooling of the product - reducing its temperature as quickly as possible to below 5°C is essential. 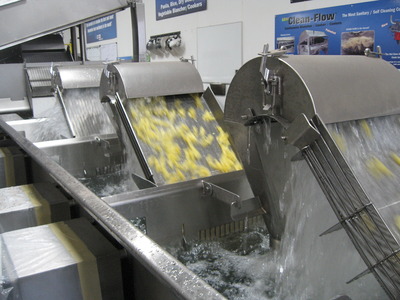 The energy usage in this cook-and-cool process can be considerably improved with the addition of a mid-process quench step, adding a small reservoir between the cooker and the cooler.

Instead of moving the product directly from the 93-96°C water temperature of the cooker and into the 1-4°C chiller water, a mid-process quench cycle with unheated ambient-temperature tap water can capture much of the product’s heat before it enters the primary chill cycle. Since the quench tap water is not preheated, it requires no energy input.

Quenching reduces the temperature of the pasta, rice or vegetables down to 43-48°C, capturing 45-50% of the cooked product’s heat energy in the quench water. The quench water can then be used in the cooker for make-up water to rehydrate the product, instead of bringing in the usual 18°C tap water to reach the 93-96°C temperature cooking range. This sizably reduces the energy draw normally needed to heat the cooker water.

The quench system, called Easy-Flow, also developed by Lyco Manufacturing, maintains 100% uniform product cooling with less than 1% product damage. Rice, most varieties of pasta and select vegetables can be cooled in the quench to 43-48°C before entering the chilled water cooler.

Easy-Flow uses a patented plenum technology to achieve its high-speed cooling without damaging the product. The pasta, rice or vegetables are pulled through the cooling plenum at the bottom of the tank by Venturi effect, which increases the velocity of the fluid without pump impeller contact. The Venturi effect creates a pressure differential that pulls the water and product through at a high speed with the capability of moving 1100 litres of water and product through the plenum per minute.

For the chiller under the same conditions, with the quench system in place, BTUs, tons of cooling required per hour, and kilowatt hours can be reduced by 41%.

These recent technological advances in continuous-process cooking and cooling have allowed food processors to significantly reduce their energy and water consumption, while achieving improved equipment and process ROI.

Why do some people develop life-threatening COVID-19?