How the food industry can contribute to greenhouse gas reductions 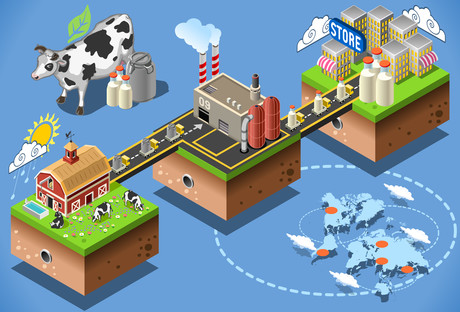 In the scope of the Paris climate protection agreement, Germany has committed itself to reduce its greenhouse gas emissions by 2030 by 55% compared to the level of 1990. Only two things can help here: designing the processes as energy-saving and efficiently as possible and relying on renewable energy. Which technologies do the food and beverage manufacturers need to reduce the consumption of energy in the production processes?

Everyone is talking about the energy turnaround. At Malzers, in Gelsenkirchen, this principle has long since become everyday routine. For two and a half million euros, the industrial bakery installed a gas-driven combined heat and power (CHP) plant including a 12-cylinder engine, which drives a generator to produce energy. Since then, combined with a photovoltaic system spanning 7000 m2, Malzers has been generating around three-quarters of the required energy consumption itself. Furthermore, the CHP plant provides heat, refrigeration and steam and is coupled with an absorption cooling system — in this way the waste heat that is not needed in the summer can be implemented to refrigerate the raw materials. The fact that the company reduces its carbon dioxide emissions by 2000 tonnes a year demonstrates that this is not purely conceived as an economic solution, but also protects the environment.

Components for a sustainable energy supply

The coupling of power and heat is one of the key technologies demonstrated at Anuga FoodTec that enables food manufacturers to become less dependent on energy suppliers. In Germany the final energy consumption of the industry has remained at a constant level of around 60 terawatt-hours a year for several years. The rising energy prices are becoming an ever-increasing cost factor, where each saved kilowatt-hour counts. The average share of the energy costs in the value chain of the milk industry is around 5–8%, in the meat processing industry it is up to 15%. Against this backdrop, investments in the implementation of highly efficient CHP systems are as a rule amortised within two to six years.

However, the companies only remain competitive if they succeed in integrating more photovoltaic systems or biogas plants and cogeneration units into the operational power supply system long term. Intelligent systems take care of the coordination between the generation, distribution, storage and consumption of the decentrally produced power. The correlation between the energy turnaround and the Fourth Industrial Revolution becomes apparent at the latest here, because the networked production in the smart factory also guarantees a higher transparency of the energy flows. This close coupling of the food production to the energy industry via intelligent power grids (smart grids) makes a contribution to the energy turnaround that is not to be underestimated — and offers the company a significant savings potential. Thanks to the intelligent network control they can flexibly react to seasonal fluctuations in the demand and avoid expensive peak loads.

Use of energy from the environment

Industry 4.0 is proving to be a direct pacemaker for the energy turnaround at field level. More and more sensors are implemented for the continual monitoring of ramified production plants, which in turn don’t need a battery since they send their data by radio transmission. They directly ‘harvest’ the required energy from the environment via energy harvesting. This means processes that transform the energy available on-site from temperature gradients, solar radiation or mechanical movements into usable energy.

An example here is the low energy sensor BlueTEG of the Fraunhofer Institute for Integrated Circuits IIS. It measures values such as the ambient temperature or acceleration rates and sends these to a tablet via Bluetooth. It uses the temperature difference between a source of heat and the environment to gain the electrical energy needed to power the electronics. In this way, self-sufficient, maintenance-free and wireless systems with almost unlimited stand-by times become reality. The areas of application include among others sensor networks for the monitoring of machines and plants (condition monitoring), tracking systems and sensors for building automation. The market of the energy harvesting systems is still in a very early phase.

The basis for more energy efficiency

From the field level through to the production planning, the implementation of an IT-supported energy management system according to DIN EN ISO 50001 is always the starting point for considerable savings. This enables food manufacturers to determine, document and continually improve the consumption of their plants. As scalable systems they can be integrated into the process control system at any time in the form of add-ons. Thus, in addition to the plants for the generation of energy and the sensors for monitoring the operating states, the focus also needs to be on the corresponding software solutions. They are what initially enable the producers to sustainably improve processes, permanently increase efficiency and thus save costs as well as reduce the greenhouse gas emissions.

Energy efficiency in the food industry along with decentralised supply concepts and renewable energy sources will be focus areas at Anuga FoodTec, the international exhibition and trade fair for food processors and manufacturers which will take place from 20 to 23 March 2018 in Cologne.

How cells remember their identity

Seizing the potential of certificates for securing Industry 4.0