Reducing energy consumption is one of the most important requirements today when modernising machines and systems. Often, there is great potential for saving energy - which, in the end, means saving money. While retrofitting a transportation system, Vienna-based Coca-Cola Hellenic Austria used the Movigear mechatronic drive system to reduce energy consumption by 75%, which is equivalent to an annual reduction of 41 tons of CO2. What’s more, the amortisation time is less than one year, meaning project managers had little trouble in gaining approval from their finance department.

Coca-Cola Hellenic Austria is the licensed bottler of the Coca-Cola Company in Austria. When the company decided to modernise a transport line in its bottling plant in Vienna, reducing power consumption and reducing CO2 emissions were the main priorities. Additional requirements included standardising the drive variants that are used in order to simplify the stocking of spare parts and facilitating a fast restart of the system after the conversion. The final goal of the retrofit was to simplify maintenance.

SEW-Eurodrive GmbH and Coca-Cola Hellenic Austria have long shared a close partnership. And this isn’t just due to the fact that the companies are located near one another in Vienna. The companies have long engaged in regular business contact regarding standard gearmotors and frequency inverters. It was

because of this that the Sew Vienna employees were able to recognise the numerous benefits that the mechatronic drive system would have to offer the client, Coca-Cola Hellenic. With detailed energy consumption calculations, SEW-Eurodrive was able to show that the transport system could attain the highest level of energy efficiency using Movigear.

SEW-Eurodrive product manager Darren Klonowski is responsible for the Movigear in Australia. He explains, “The individual components may be a bit more expensive than the conventional solutions, however, these products provide the customer with clear additional advantages that quickly translate into financial benefits: lower energy consumption, reduced installation costs, shorter startup times as well as simplified maintenance and diagnostics. Movigear offers clear advantages for the end customer. It is 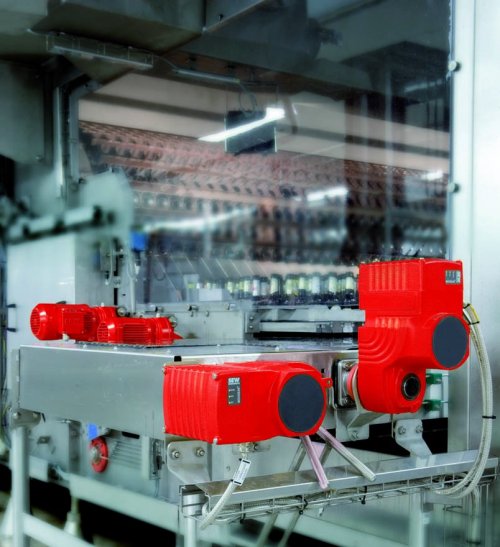 also easy to clean and saves on water and cleaning products. This is an obvious advantage in a bottling plant.”

Technology of the transport line

In less than six months, the leaders of the beverage company managed to organise the changeover of their beverage line - from filing the budget and taking care of the technical planning, all the way to fully utilising the narrow time window for the conversion. By the beginning of 2010, it was time: the company was ready to modernise transport line 2a. This line links the bottling plant for Coca-Cola, Fanta and Sprite to the palletising system via the packaging machine. PET bottles holding 0.5 to 2.5 L are handled in this area. Previously, the line was driven by standard line-powered gearmotors. As part of the modernisation, the company replaced a total of 39 gearmotors - some with inverters, but most without - as well as the controller for the drives.

Instead of using 24 V switch contactor technology for line-powered motors, the company opted for Profibus interfaces. This allows the operator to change the speed as required and adjust it precisely to suit the process. In addition, the Profibus interface optimises the system’s ability to shut down the line in case of a jam and minimises idle times. These measures result in a noticeable reduction in power consumption.

The Profibus transmits the control signals from the PLC to the drive and transmits current diagnostic and status signals from the drive to the controller. The use of Profibus also offers completely new diagnostic options. The operator now has much more than an I/O display: the speed and current are displayed on a keypad, allowing the operator to check whether mechanical components are moving freely, and, should service be required, the fault type is displayed. Bus operation also allows the operator to record the current for general monitoring purposes and serves as an indicator of capacity utilisation. From a service perspective, Movigear, in combination with Profibus, offers a wide range of additional options.

With the Movigear system solution, power supply and communication are handled using SNI technology (Single Line Network Installation). This allows energy and communication transfer in one shielded cable, thereby decreasing the number of components required while significantly reducing the installation cost. The actual, mechanical conversion of the system took place over an extended weekend, from Friday morning to Sunday evening. In this short period of time, the old drives were disconnected and mechanically removed and the new drives were mechanically mounted, electrically installed and started up. On Monday morning, production started up again in the bottling plant.

Wien Energie GmbH, the largest regional power supplier in Austria, was involved in the conception of the retrofit from the very beginning. Before and after the modernisation of the transport system, the power supplier performed detailed measurements that confirmed and even exceeded the estimated figures.

With the complete system solution, Coca-Cola Hellenic Austria was able to reduce the power consumption of the transport line by a sensational 75% (in comparison with the technology previously in use). This means that the investment pays for itself in less than one year. Extrapolated from a five-day measurement of the amount of energy consumed, the new system will generate an estimated savings of 41 tons of CO2 annually. These savings were achieved by multiple measures carried out in parallel, however, SEW drive technology played a major role in these results.

Erwin Langela, Manufacturing Director of Coca-Cola Hellenic Austria explains, “For Coca-Cola Hellenic, it was always an important priority to optimise production, not only economically, but also ecologically. For this reason, we were searching for different ways to reduce our CO2 footprint, which serves as a measurement of the effect of our daily activities on the environment and climate change. SEW-Eurodrive suggested replacing the drives in our conveyor belts with the Movigear mechatronic drive system. Now, half a year later, independent audits show we were able to reduce our power consumption by 75%. That translates to an annual reduction of 41 tons of CO2. We want to keep going in this direction. Not only do we want to implement the Movigear system in Vienna - we plan to use it in Edelstal (Austria) as well, and we want to use SEW technology in the bottling of our ‘Römerquelle’ mineral water.”

And SEW Product Manager Darren Klonowski adds, “We kept the suggestions and desires of our clients in mind from the very beginning, going all the way back to the development of the Movigear system. For this reason, this mechatronic drive system from SEW-Eurodrive is practically the best system out there at the moment.”

Thanks to these amazing results, upon the start of the new application, SEW-Eurodrive received another contract for a second transport line for PET bottles with soft drinks. As part of the modernisation of this line, the first step is to take stock of the existing system by generating a parts list: how many drives are currently in use, what are the gear ratios of these systems, etc.

Klonowski explains, “SEW-Eurodrive now has plenty of experience retrofitting existing systems. Coca-Cola Hellenic recognised how important energy-efficient drives are for the company. System designers also have to see these benefits and pass them on to their end users. These include lower installation costs, lower startup costs and the benefits of standardising the company’s drive technology.” Coca-Coca Hellenic Austria is so confident about SEW drive technology that the company now specifies Movigear as the drive system in its calls for bids to system designers.