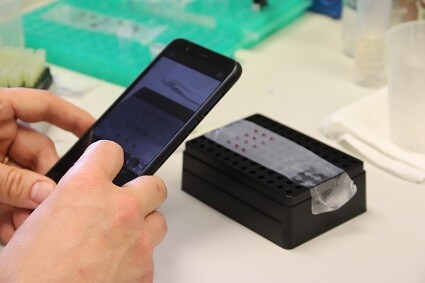 Researchers from the Universitat Politècnica de València (UPV), belonging to the Interuniversity Research Institute for Molecular Recognition and Technological Development (IDM), have developed a new test for the food industry that uses a mobile phone to detect gluten in food in a simple, fast and inexpensive manner.

The system is a colour test in which the change of colour — in this case, turning red — indicates the presence of gluten in the food, meaning it is not safe for consumption by coeliacs. The test has been described in the journal Food Control.

“The process is very simple: we take a food sample, we grind it up, extract the DNA and amplify it,” said Luis A Tortajada-Genaro, a researcher at IDM. “Once the sample has been prepared, we mix it in a vial with gold nanoparticles, and in just 10 minutes, it’s ready to measure and that’s where the cell phone comes into play.”

Similar to rapid antigen tests, to analyse a food you only need three droplets of the sample. These are deposited on a plastic membrane, which you then take a picture of with your phone.

“Based on the apps available on the market, we can break the colour down into three primary colours: red, green and blue — the RGB breakdown,” Tortajada-Genaro said. “The redder it is, the more gluten concentration there is in that food. Thus, in a fast and simple way, we can detect whether or not there is gluten in the food, and even its concentration level.”

Tortajada-Genaro said the main advantage of the test is its ease of use and fast response time, particularly in comparison to traditional gluten tests.

“Today, specialised staff are required to do this analysis,” he said. “Among other processes, a sample must be taken to the laboratory, which takes at least five hours to get the result; whereas with our system, we can know whether or not a food has gluten in fewer than two hours.”

In addition to the detection of gluten, the team say their test can be used to prevent fraud in the food industry, specifically to detect possible adulterations of meat products.

“During the preparation of certain meat products, to improve its properties, grains are added, even though the regulations establish a limit,” said Tortajada-Genaro. “In our case, we apply the test to detect a specific gene from these grains, with the objective of controlling it to not exceed that maximum quantity.”

Tortajada-Genaro concluded that the team’s results “show that the biodetection system developed is very competitive, and it allows for better product control. It is a system that responds to the demands of the food industry and consumers and contributes to guarantee food quality at all times, following the ‘from farm to fork’ strategy.”

The industry body for meat and livestock in Australia, MLA, has provided information about the...