KHS and RHODIUS building bottling lines for the future 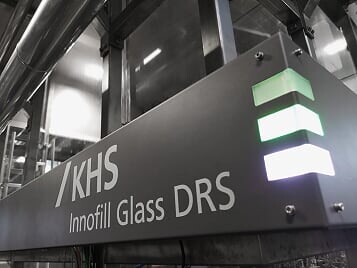 RHODIUS spokesperson Hannes Tack said the bond between the two companies has ultimately grown over the years.

“It all started in 1970 with our first canning line from KHS. We now operate two of these, plus a PET, a keg and a brand-new returnable glass line,” Tack said.

Planning began at the end of 2017. At RHODIUS, glass containers for its own licensed and home brands already had a share of more 50%, with an upward trend noticeable.

The biggest challenge was to find enough space for the extensive technology needed to process the vast range of products and containers.

With a spectrum of 11 different bottles and seven types of crate, the high number of sorting functions initially caused a few headaches.

The existing production shop was expanded in as far as this was possible.

Tack said that a lot of energy and creativity went into precisely coordinating the line layout to fit into its limited surroundings. In doing so, some units were planned as joint machines that can perform two functions.

One example of the above is the combined, fully automatic palletising and depalletising of full and empty containers. In a first function, a robot picks up crates of returnables from the pallet and feeds them into the process. In a second, it places the full crates back onto pallets according to a set pattern that is then ready for discharge. During the shift, the functions can be flexibly assigned as required depending on the workload, thus ensuring a high efficiency level. 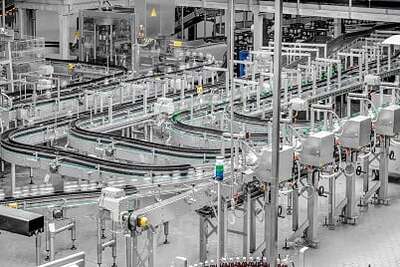 The various 200- and 330-millilitre glass bottles — also from third-party brands — were separated by a camera system and directed towards their own dedicated conveyor belts. Processing and enhancing the diverse assortment of empties is a space-consuming activity. In total, these process steps require more than half of the 800 m2 taken up by the bottle shop.

Saving space was also an important issue in the packaging area. As there wasn’t enough room on the horizontal, the various format head parts are vertically stacked in changing magazines and selected and replaced as required in a fully automatic procedure.

“As a result of our large portfolio of products, the changeover times had to be cut down to the absolute minimum,” Tack said.

“All units are automated for conversion as far as possible and where prudent to considerably reduce the amount of manual work performed by our operators.”

Alongside these extensive automation measures, a high degree of creativity was needed.

For the bottle washer, for instance, an alternative had to be found to the usual steam heating method. RHODIUS’s boiler room was old and had reached the limits of its capacity.

In its place, KHS developed a direct heating system that doesn’t need any long pipes and largely prevents heat loss through the piping. Simultaneously, the bottle washer can also be converted to direct hot water operation when a combined heat and power plant becomes available as a source of energy in the future.

KHS has designed the blender so that the single ingredients can be dosed as needed to cater to the product variety — from one-to-one mixtures for spritzers to the minimal flavouring of near-water beverages. Moreover, the filling section’s design on the glass filler was based on a hygiene concept, enabling sensitive products to be filled. This includes an air exchange that takes place 30 to 40 times an hour in the filling machine’s hygiene area. 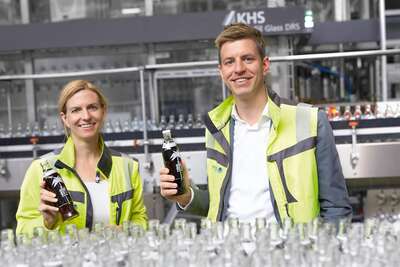 Tack said that as the demands made of the system were extremely complex, the company allowed for plenty of time when planning it.

“The design phase of 12 months was marked by frequent mutual visits and trips out to see reference systems. We were able to find all the answers together — some of which demanded great effort. Each of us always did their homework and thought about where further fine-tuning could be made and how.”

Once construction in Burgbrohl and manufacture and assembly at the various KHS factories were finished in 2019, delivery and installation started. Sixty-two truckloads containing 265 metric tonnes of material were put together in the space of two months. Installation and commissioning took just 10 months, enabling the new glass line to be ceremoniously opened in January 2020.

Commissioning was slightly more complicated than expected, Tack said, and not just because of the 14 formats to be implemented.

During the process, various options were selected that were originally planned for a later date. This included filling beer from the Vulkan Brauerei, an Eifel craft brewery run by Hannes Tack’s brother Malte.

“He’s our first contract filling customer on the new line, if you like,” laughs the RHODIUS boss.

“And certainly not the last, for with the capacity successfully expanded by around 50%, products are not only to be contract filled into cans in the future but also into returnable glass bottles — at a rate of up to 20,000 bottles per hour. 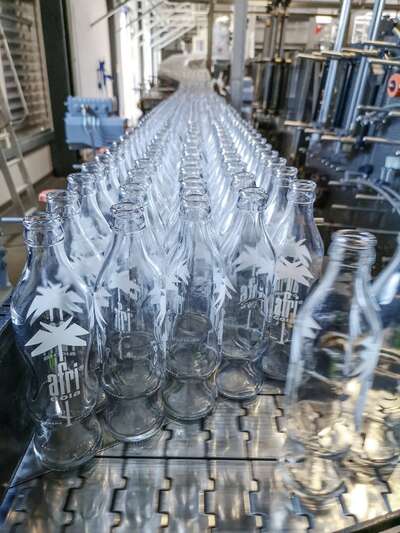 All requirements have been met in full — and not just as far as capacity is concerned, RHODIUS said.

Compared to the old line the new plant engineering saves about 40% in energy.

When selecting the machines and planning the line, RHODIUS didn’t just take ecological sustainability and energy efficiency into consideration, however.

“It was important for us to use a technology that’s durable and futureproof so that it can also meet future demand,” Tack said.

RHODIUS has invested about 15 million euros in its new equipment. Tack said implementing a project like that required unconditional trust.

“RHODIUS and KHS are two partners who respect one another and work on an equal footing.”

Hannes Tack also judges this in the way the two do business together financially.

“Being almost entirely fixated on a single systems supplier perhaps risks building up a certain dependency when it comes to purchasing. This hasn’t had any disadvantages for us to date, however, as KHS has never abused this situation.”

RHODIUS said it can rely on this being the case in the future, too — and also continue on its course of growth, established over the past 10 years, together with KHS.

All images supplied by KHS Group.

The latest edition to the Metrohm range of analytical instruments for titration is the Eco Titrator.

Plants found to carry bacteria in their cells

Mapping the genes that control the skeleton

Nanopatterning at the Melbourne Centre for Nanofabrication

Recycled wastewater gives koalas a home among the gum trees