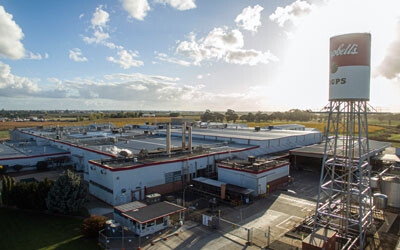 Campbell’s Australia was sceptical that new motor technology could deliver big energy savings at a factory in Shepparton. The proof was in the power bill.

The giant soup can that overlooks the Campbell’s Shepparton factory in northern Victoria is heritage-listed; a nod to the importance of the factory in a regional city which has played such a pivotal role in Australian food manufacturing.

The history is on the outside; inside, there’s a strong push for modern, energy-efficient technology and waste reduction across the production line, as part of the company’s target to reduce energy consumption by 20% by 2025.

Nevertheless, when local ABB Value Provider A1 Electric Motors suggested a motor and drive upgrade with impressive projections for the energy savings, Campbell’s Shepparton Environmental and Safety Manager Mark Hyland was hesitant. “I wanted to see another factory make the first move, so I could read the case study about it and act on it then,” says Hyland with a laugh.

Facilities and sustainability fall under Hyland’s remit at Campbell’s Shepparton, but he was dubious. A1 Electric Motors was telling him he could realise 14% energy savings by installing an ABB IE5 SynRM — synchronous reluctance — motor and variable speed drive package.

“The design of our SynRM motors is key to their energy efficiency,” explains John Rieusset, Food and Beverage Sector Lead at ABB Australia. “The rotor has neither magnets nor windings and suffers virtually no power losses. And, because there are no magnetic forces in the rotor, maintenance is as straightforward as with induction motors. They also run a lot cooler, extending the life of the motor.”

Electric motors use one-third of the world’s electricity, with numbers predicted to double in the next two decades, so technologies that improve their energy efficiency can play a key role in lowering global emissions.

Hyland is a long-time employee at Campbell’s Australia and rightly proud of the improvements in sustainability he’s overseen at Campbell’s Shepparton, including water savings of more than 90 million litres a year. All the same, he was reluctant to pull out a working motor to run the trial of the ABB SynRM technology

“Then a few months after A1 Electric Motors had been to see me, a motor failed on one of the refrigeration compressors, and that made it an easier decision to try the ABB SynRM technology,” says Hyland. “We were able to retrofit a SynRM motor and variable speed drive package to that compressor and we did indeed achieve the 14% energy reduction on that machine. It was good luck that the motor failed, because if it hadn’t we probably wouldn’t have four of them onsite now!”

The improvements in energy efficiency on that first retrofit of ABB SynRM technology was all the evidence Hyland needed to upgrade the remaining three refrigeration compressors. “All except one of them run 24/7 in our refrigeration plant, so because the runtime is continuous, it justifies the expense quite easily.”

The first SynRM motor saved Campbell’s Shepparton plant just shy of $15,000 on its electricity costs and an estimated 131 tonnes in CO2 emissions in the first year, and delivered significant noise reduction, lower running temperature, smoother operation and reduced vibration. “That motor paid for itself well within the first 12 months, as did the others,” says Hyland, adding that the remaining three already had some efficiency upgrades, such as variable speed drives, but still delivered 6–7% energy savings.

Other motors in the plant don’t have the same runtime as the compressors, so at this point they won’t retrofit more operational machines. “But it’s not the end for us; when we have failures and install new technology, we’ll most likely replace it with SynRM,” he says.

“The timing of the arrival of the SynRM technology was perfect for us,” says Hyland. “We see all sorts of technologies coming up and it’s key to understand the fit for your business — because not everything will be right. These motors came as we saw soaring energy prices, and their efficiency also supports our big focus on global warming. It’s very important to us, and this kind of technology certainly makes my role easier and makes our environmental targets easier to achieve and easier to quantify.”

Hyland is doing proud by the Big Can. It began its life in the ’60s as a water tank for the factory and the trade dress on the monster model is to scale with an actual soup can. Just as the can has stood the test of time, Hyland is sure the ABB SynRM motors will too. “Instead of reading the case study, we became the case study,” he says, “and I’m very glad we did.”