Tracing contaminated produce has not been easy — until now 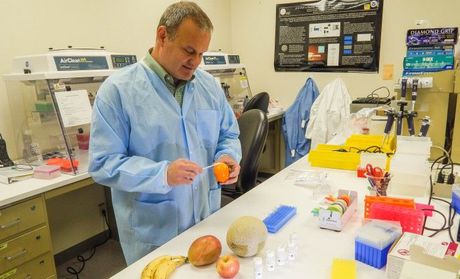 Edible, invisible barcode equivalents are on the verge of revolutionalising traceability in the fresh produce and processed foods industries.

Even though about one person in every six is affected by food poisoning each year, most of the time the source of the contaminated food is not identified.

Contaminated fruit and vegetables can be especially problematic from a traceability standpoint. By the time people start feeling the symptoms of Salmonella or E. coli poisoning, tracing the origin of the contamination might be tricky, time-consuming and expensive. The store where the product was purchased may have received produce from multiple farms and have already disposed of shipment boxes. The contamination might not even have occurred on the farm, but somewhere en route as part of the distribution process. A typical process to trace food includes interviewing consumers and suppliers and examining every detail of the supply chain — a tedious procedure that takes weeks at best to complete. But a solution to this is in the pipeline.

Lawrence Livermore National Laboratory (LLNL) researchers, in collaboration with the start-up Safe Traces (formerly DNATrek), have developed a cost-effective and highly efficient method to accurately trace contaminated foods (including fruit and vegetables) back to their sources. This SafeTraces (formerly DNATrax) technology was initially designed by LLNL to track indoor and outdoor airflow patterns.

“One of the unexpected capabilities from DNATrax was being able to apply it to food products,” said George Farquar, an LLNL physical chemist who led a team of researchers that developed the technology for biosecurity applications. “You can spray it on food products in the field to identify and track the source of the food.”

The technology is based on using sugar and non-living and non-viable DNA particles as invisible barcodes. The odourless and tasteless particles have been approved by the Food and Drug Administration as a food additive and safe for consumption.

The invisible barcode tracing system will allow food producers and distributors to apply unique, edible, plant-based barcodes directly on or in food products such as fresh produce or prepared foods. It can be applied in many different ways — mixed directly with the food or sprayed on as part of rinses, washes and food coatings. That is why it can be applied to pretty much every type of food, including olive oil, cantaloupe, honey, coffee beans, seafood, meat, apples and leafy greens.

It has been estimated that if SafeTraces was applied on every single food item a person consumed it would add only about 70 cents to their annual grocery bill.

The barcodes contain complete traceability information. Each piece of produce carries with it information about where it was grown, who picked it and when, equipment used, farming methods etc. If there is a problem, long after the packaging has been thrown out, the origin of any food product can still be identified.

Tracing food back to its source with SafeTraces will take minutes versus the weeks needed using existing methods that often yield inconclusive results, if any. Tracing contaminated produce back to the farm within minutes will also enable producers and wholesalers to issue very targeted recalls rather than the widespread, costly precautionary recalls that are frequently used today.

The same process also works for detecting food adulteration or fraud. Mislabelled foods are becoming a serious problem that is costing the food industry billions of dollars. It’s particularly problematic with premium goods such as olive oil and wine. Milk, honey, olive oil, juices and other food products are frequently adulterated with less expensive ingredients and clouding agents, and sometimes with dangerous ingredients, such as melamine, formaldehyde and toxic dyes.

In the case of olive oil, SafeTraces can be added to the olives as they are pressed into oil. If the fraudulent bottle is pulled off a store’s shelf, a quantitative analysis can be done on the SafeTraces to determine how much of the oil has been diluted. This technology will take traceability, accountability and food safety in the fruit and vegetable industry to a whole new level.

Image caption: George Farquar, who led a lab team that invented DNATrax, demonstrates how the product can be applied to food to identify it down the food chain. Image: Julie Russell/LLNL