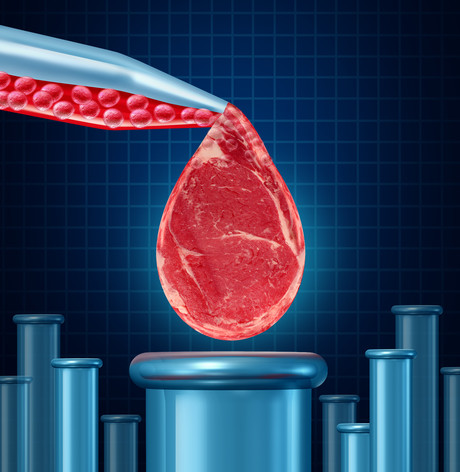 In the US, the US Food and Drug Administration (FDA) and the US Department of Agriculture (USDA) are preparing for war.

The war isn’t with a hostile outside force but with each other as both federal agencies believe they should the one to regulate high-tech, cell-cultured meat companies producing ‘clean meat’.

This clean meat is meat grown in vitro from cell cultures instead of from slaughtered animals. It is a form of cellular agriculture that utilises many of the same tissue engineering techniques traditionally used in regenerative medicine. The lab-grown meat is made by extracting cells from an animal and prompting them to mature into muscle fibres and grow in a bioreactor. No products are commercially available yet, though several companies have indicated that their first generation of cultured meat will be available in the next 5 years.

As the products are so far unavailable their safety, composition, functionality and sensory properties are unknown to all but the creators. How comparable will the products be to conventionally slaughtered meat products?

Though production methods will vary by company, Paul Mozdziak, an expert in animal cell culture at North Carolina State University, expects many will isolate cells from a tissue biopsy of a living animal to establish cell banks — vials of starting material that can be thawed and multiplied in batches. Bacteria or viruses could sneak into the initial tissue sample, or into the cultured cells as they’re transferred to successively larger quantities of culture medium, or when medium is added to prompt them to grow, he noted. And large-scale bioreactors must also be carefully sanitised. The materials used in cellular scaffolds — structures that support the muscle cells as they grow — must also be evaluated for safety.

Rhonda Miller, a meat scientist at Texas A&M University and often associated with the American Meat Science Association, has pointed to several unanswered questions: Does cultured meat spoil at the same rate as conventional meat? Does it allow the same growth of potentially harmful microbes? Is its shelf life the same? Does it have the same nutritional qualities?

Currently the FDA regulates some 80% of the food supply in the US, including most fish, produce and some specialty meats, while the USDA regulates most meat products and catfish.

The FDA already has expertise in judging the safety of foods that involve cultured cells including extracts of the algae spirulina and a fermented fungus used in Quorn. It seems that cell-cultured-meat start-ups generally favour having the FDA regulating policies and rules for food safety product labelling mainly because they fear the USDA’s relationships with established meat groups could disadvantage the clean meat industry. There is already a strong push from the US Cattlemen’s Association to prevent the clean meat industry even using the word meat.

However, many in the meat industry argue that clean meat should be held to the same safety and labelling standards applied to conventional meat — standards enforced by USDA. “If these companies wish their products to be marketed as meat … production of these items should be regulated by the agency Congress chose when it enacted the Federal Meat Inspection Act,” said Tiffany Lee, Director of Regulatory and Scientific Affairs at the North American Meat Institute in Washington, DC.

Which agency will end up being responsible for regulating the nascent clean meat industry? Only time will tell, but one thing is certain, improvements in transparency around methods of production, ingredients and consumer safety are needed.