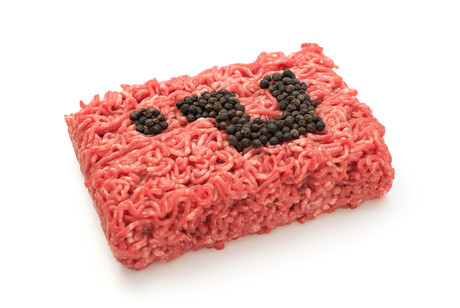 Foods of a certain origin or production method are becoming increasingly popular. Extra virgin olive oil, beef from Argentina, Parmigiano Reggiano, Jamaican Blue Mountain coffee, Manuka honey from New Zealand or Cabernet Sauvignon from South Africa are some of these examples. With an organic seal on the label, consumers may be more willing to pay a premium.

International operations such as OPSON have repeatedly demonstrated that premium and even mass products are being counterfeited and marketed on a large scale. Counterfeiters often take advantage of the complex international supply networks, as was shown in the horse meat scandal in 2013.

Food adulteration can have many different manifestations, so what exactly is food fraud?

Food fraud is a deliberate violation of food law, whereby an economic gain is achieved by deceiving consumers. Four key criteria must be met:

A company can also become a victim if it unintentionally buys counterfeit goods and processes them into its products; figure 1 illustrates the interrelationships. 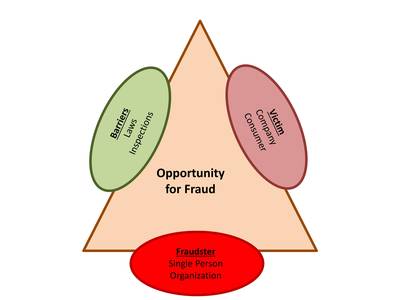 On an international level, the terms may differ to a certain extent. What is understood in Europe as “Food Fraud” is called “Economically Motivated Adulteration (EMA)” in the US and needs to be distinguished from “Intentional Adulteration (IA)”. The latter includes, for example, antibiotic residues (food safety), as these were administered to the animal intentionally.

To avoid confusion, it is also useful to distinguish the term food fraud from other infringements of food law. These can be divided into the four categories Food Quality, Food Defense, Food Safety and Food Fraud (Food Risk Matrix, Spink, et al., 2011). Infringements in the various categories differ in terms of the motivation of the actor and their intention. 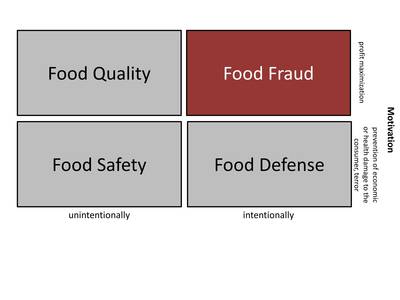 Maximisation of profit is the motivation to achieve high food quality — infringements in this area are accordingly unintentional.

In this case, the motivation is to avoid any damage to the health of the consumer. Since infringements represent an economic loss for the person placing the product on the market, cases in this category are also unintentional.

Food Defense is concerned, among other things, with protection against damage to health and economic interests. In contrast to food safety, however, it is based on an intentional act, such as that underlying blackmailing or terrorist acts.

Here the motivation is to maximise profit, but not by maximising product quality at the same time, but by dishonest means. Thus, there is an intentional act that results in financial damage to the defrauded. Most cases result only in financial damage, but in some cases, food safety may well become an issue, such as the adulteration of baby food with melamine that occurred in China a few years ago.

Which matrices are affected?

Wherever there is an opportunity to increase profits while the probability of being caught is low, adulteration in one form or another is to be expected. Available ‘food fraud hit lists’ differ slightly depending on the database used. Mostly, however, the same foods are found in the top 10, although occasionally in a slightly different order. 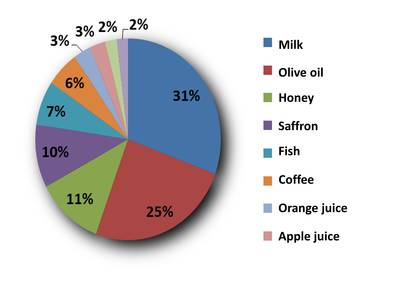 Figure 3: Food fraud hit list of the most frequently adulterated food, based on data from the USP Food Fraud Database (now Decernis).

The most common adulteration is the replacement of a valuable ingredient. Examples are syrup in honey or foreign oils in olive oil. Another type of adulteration is masking of defects on fresh fruit by means of (possibly harmful) dyes.

Other examples of adulterations are:

A comprehensive overview of food fraud and definitions in this area is provided by the CEN Workshop Agreement (CWA) 17369:2019.

How can I protect myself?

The range of adulterated products is very broad. Often comparatively high-priced products are affected, but nevertheless products from large-scale production should not be disregarded.

First of all, it is necessary to be aware of the current situation in an objective manner. This is best done through a vulnerability assessment (VACCP, Vulnerability Assessment Critical Control Point). In Europe, companies that are certified according to IFS, BRC or comparable standards have to do this anyway, as it is required by the food standards.

In the vulnerability assessment, various steps of the supply chain and also internal processes are examined and evaluated with regard to the probability of an adulteration occurring. In this way, vulnerable points can be identified, for which a mitigation strategy is then developed and implemented. This strategy can include, for example, an increased number of audits of suppliers or the testing of products by laboratory analysis.

Within the scope of VACCP, products are evaluated with regard to a possible probability of adulteration, and the use of databases which contain data on known cases of food fraud and also other information can facilitate VACCP.

It is important to note that vulnerability assessments are not single events, they rather have to be carried out on a regular basis.

How do laboratory analytics support?

The analytical proof of authenticity or adulteration is usually very demanding, as in many cases it is not known how and with what the product has been adulterated. More obvious adulterations can even be detected by sensory means, eg, smell and taste.

But usually this is much more complex.

The TCF² has a global network of Tentamus laboratories, which employ the latest technology and necessary know-how to answer questions in the field of food fraud by means of state-of-the-art analysis. Various techniques are used for this purpose:

This technique is used to determine the ratios of different isotopes. Commonly the isotopes of carbon (13C/12C), hydrogen (2H/1H), nitrogen (15N/14N), oxygen (18O/16O) and sulfur (34S/32S) are used for this purpose. Comparison with reference samples allows for differentiation of geographical origins, eg, for vegetables. It is also possible to distinguish organic products from conventionally produced products (eg, pork, beef, vegetables). The carbon isotope ratio allows conclusions about adulteration of honey with corn or sugar cane syrup. It is also possible to distinguish natural vanillin from the vanilla pod from biotechnologically or synthetically produced vanillin.

High-resolution mass spectrometry, usually coupled with liquid chromatography, also allows the analysis of a large number of different substances that provide a sample ‘fingerprint’. Comparison with reference samples provides insight in possible adulteration of the product. In addition, it is possible to identify adulteration markers using HRMS, which can then be transferred to classical triple quadrupole mass spectrometry (LC-MS/MS). At the moment HRMS is primarily used for honey, but could be used for fruits and oils as well.

This technique can also be used to create a ‘fingerprint’. A database of different authentic reference samples is used for comparison. Deviations from the reference samples indicate an adulteration. It is also possible to quantify identified substances. FT-IR is used, eg, in the analysis of milk.

This molecular biological method makes it possible to analyse the DNA present in mixtures and, by comparing it with a database, to determine the genus or even species from which the DNA originates. This works for products of vertebrates as well as for land living plants. An application would be testing of oregano for adulteration with foreign plants (olive leaves, sumac, etc). It can be also used for more complex matrices such as condiments, mixed tea and convenience food.

Initially used primarily for structure elucidation of pure chemical substances, this technique found its way into food analysis a few years ago. A large number of different substances are detected simultaneously, resulting in a comprehensive ‘fingerprint’ of the sample. By comparison with reference samples, deviations can be detected which can be used to detect adulteration or the geographical or botanical origin. Honey-Profiling, which was mainly developed by QSI GmbH, Bremen, in cooperation with the equipment manufacturer Bruker GmbH, Rheinstetten, uses NMR technology and enables the detection of adulteration of honey with sugar syrups and also provides information on the geographical and botanical origin of honey.

NMR is also suitable for comparing different batches of the same product or for comparing a sample from the country of origin of a product with the delivered product at the destination.

This technique is already established in the analysis of residues and contaminants, such as pesticides, antibiotics and pyrrolizidine alkaloids. Among other things, it is ideally suited for the detection of adulteration markers that have previously been identified using a non-targeted approach, such as HRMS, with high sensitivity at high sample throughput. Thus, there are various parameters that can be measured, eg, in olive oil, with this technique with targeted analysis. Presence or exceedance of a defined value indicates adulteration. For example, for cinnamon, the parameter coumarin provides an indication of the origin. Furthermore, markers for sugar syrup admixtures to honey, which are characteristic for eg, rice or beet sugar syrup, are also analysed.

This list is of course not complete. Depending on the product, other methods are used and many different other technologies are used.

The term ‘blockchain’ is also often used in connection with food fraud. First of all: this is NOT the ultimate solution to the problem of food fraud. A blockchain is a chain of several transactions and used as a digital register which records transactions between two parties.

The advantage of blockchain lies in its strong protection against manipulation. Every modification to the blockchain is traceable. However, a blockchain alone cannot guarantee the integrity of data it contains. This is still the responsibility of the person who must ensure that all data stored in the blockchain is correct and authentic. If this is the case, however, the data is safe from manipulation. Currently, an increasing number of food companies are starting blockchain projects. Walmart was a pioneer with a blockchain for mangos. In this pilot project, consumers were able to gain insight into the supply chain all the way to the producer by reading a QR code printed on the product label with their mobile phone. The possibilities here are (nearly) unlimited. Anyone who deals more intensively with blockchain technology will sooner or later come across the term ‘smart contract’. Smart contracts automatically check if certain conditions are met that parties negotiated and agreed on before. They can be organised in a legally binding way. For example, upon delivery a product is automatically prepared for lab testing. Results are then automatically compared to contractually agreed specifications. Finally, the delivery is automatically released and payment for the delivery is automatically initiated. In the light of advancing automation and Internet of Things, it is recommended to keep an eye on this topic.

Results of a study have shown that targeted cleaning, demonstrated by ATP monitoring, can improve...

Leveraging technology to support the future of nursing

When survival comes down to the hospital food