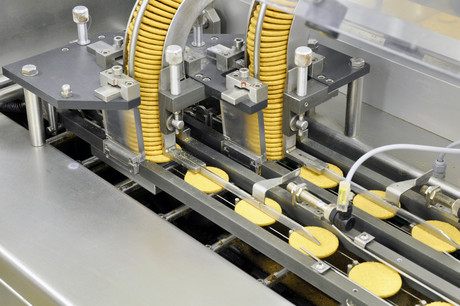 Sometimes there’s more to food than just, well, the food itself — materials that come into contact with food as it is being processed, packaged and transported have the potential to leach chemicals into the product.

Packaging, storage tanks, machinery, transportation containers — these and other critical components of food production have the potential to leach chemicals into foods and beverages.

The steps involved in bringing food to grocery store shelves present a ubiquitous yet poorly understood route of exposure to chemicals of which most people are unaware. Researchers have limited knowledge of the breadth and relative safety of all materials that may come into contact with food during processing. This lack of information impairs their ability to assess risk and to inform public policy, according to the authors of a commentary in Environmental Health Perspectives.

In addition to their constituent chemicals, food contact materials may also contain complex mixtures of non-intentionally added substances (NIAS), such as reaction by-products and impurities.

In one 2007 study, chemical analysis of plastic samples from food contact materials turned up unidentified compounds that could not have been predicted from the known composition of the samples. According to the commentary authors, led by Martin Scheringer of the Research Centre for Toxic Compounds in the Environment at Masaryk University, Czech Republic, and Jane Muncke, manager of the non-profit Food Packaging Forum, these findings indicate that “comprehensive qualitative and quantitative chemical analyses of plastic [articles that come into contact with food] are currently impossible”.

There is evidence that plastic products such as food wraps, bags, clamshell containers, and baby and water bottles leach chemicals with endocrine-active properties that potentially pose health risks even at very low levels. However, this consideration has not made its way into risk assessment as far as food contact materials are concerned.

To improve risk assessment, the authors recommend evaluating potential low-dose effects (common with endocrine disrupters) for all of what they dub food contact chemicals, or any chemical that is either used in the manufacture of food contact materials or otherwise present in finished food contact materials. Notably, they also recommend performing toxicological assessments of these finished materials — in other words, the complete mixture of substances used to produce the material as well as any NIAS that may be present.

The latter recommendation would be a significant change to current practices in the United States and Europe for two reasons, Muncke said. First, it takes into account the idea that mixtures, not just single substances, can migrate into food. Second, it shifts the chemical risk assessment from the beginning of the manufacturing process to the final stage — “better reflecting the reality of what comes into contact with food and what people are exposed to”, she said.

Mark Maier, formerly a staff toxicologist for Valspar Corporation, led that company’s efforts to identify a non-estrogenic replacement for bisphenol A (BPA) in its coatings for food and beverage cans. A January 2017 study co-authored by Maier, who continues to consult for Valspar and was not affiliated with the new commentary, found no evidence of estrogenic activity by the company’s replacement epoxy monomer, tetramethyl bisphenol F (TMBPF).

“The way I look at it, Valspar is trying so hard to do the right thing,” he said. “They’re trying to get the data that’s called for in this paper. As far as their willingness to make data transparent and make data available, I think Valspar stands alone in that regard. But gosh, I hope that can change.”

However, Maier disputes the authors’ recommendation that researchers and regulators ensure adequate toxicological assessment of all food contact chemicals. “I would frame the recommendation differently,” Maier said. “If you [attempt to] test everything for every possible problem, you have to evaluate every packaging chemical and mixture to the nth degree. That makes no sense for chemicals with such low exposures.” Instead, he said, researchers should focus on plausible effects for relevant classes of chemicals at relevant exposure levels. He also believes there is no reason to keep retesting materials such as polyesters and acrylics “just to show what we already know”. He explained, “You can’t test everything; you have to test for things that make sense. You will never get all of them.”

That said, the US Food and Drug Administration’s “generally recognized as safe” (GRAS) designation is a loophole that has allowed many unknown and potentially unsafe chemicals into foods over the last 60 years, according to a 2014 report from the non-profit Natural Resources Defense Council (NRDC). A general lack of transparency pervades the regulatory environment for food contact materials, said commentary co-author Maricel Maffini, an independent consultant on issues related to environmental health, chemical safety and science policy.

“In many cases, some of those chemicals were approved decades ago with likely almost no toxicity data,” said Maffini, who also coauthored the NRDC and TBMPF studies. Even today, she said, “if a company claims that exposure will be below a certain level, the company may not be required to provide any toxicity info. The amount of data that’s available is very limited.”

To see the original article and further references, visit https://ehp.niehs.nih.gov/ehp2602/.

*Nate Seltenrich covers science and the environment from Petaluma, California. His work has appeared in High Country News, Sierra, Yale Environment 360, Earth Island Journal, and other regional and national publications.