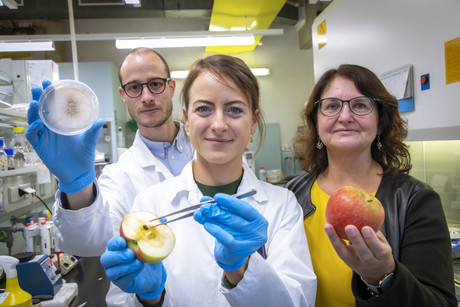 Post-harvest losses of fruit and vegetables due to spoilage along the supply chain represent a significant problem which can cost millions. According to FAO (Food and Agriculture Organization of the UN) statistics, almost half of the world's harvest (45%) of fruits and vegetables is lost on its way to the end consumer. The main causes of spoilage are pest or disease infestation and incorrect storage conditions, which can lead to rotting or loss of fresh mass due to respiration and evaporation. The only remedy until now is often the excessive use of chemicals.

Researchers from the Institute of Environmental Biotechnology at TU Graz in cooperation with the Austrian Centre of Industrial Biotechnology (acib) and industrial partners have successfully tested ecological methods that improve the storage of apples and sugar beet — representative examples for other types of fruit and vegetables.

HWT has proven to be a sustainable method for reducing fungal fruit decay after harvest in a large number of crops. In this treatment, apples are briefly dipped into a hot water bath. This 'heat shock' stimulates the apple's natural defence mechanisms, the principle of action has not yet been fully clarified. Nevertheless, there are always outbreaks of pathogens in storage and apples spoil. However, now, using the combined approach with HWT and biocontrol organisms can provide a sustainable and ecologically sound way to reduce apple blight, according to Berg.

How was it tested?

Wassermann explained the experimental set-up: "We infected organic apples with two of the most important putrefactive agents, then treated them with hot water and a biocontrol agent designed by us. This combined approach enabled us to either kill the post-harvest pathogens completely or to reduce the infection diameter to a maximum in about 60% of the apples treated in this way." Compared to the control group — apples that were only treated with HWT — the combination method showed 20% better results in the resistance of the apples to storage rot. The additive protective effect of the biocontrol agent obtained from the apple microbiome of native organic apples for the control of the storage moulds could be clearly demonstrated. The results of the study were published in the journal Frontiers in Microbiology.

Does the apple microbiome remain intact?

Together with an Austrian organic fruit company, the researchers were able to show in a trial on an industrial scale that the natural microbiome of apples remains unchanged through HWT treatment, whereas harmful fungi are almost completely contained. This proves that HWT leads to the release of certain plant defence metabolites that kill pathogens without affecting the natural apple-associated microbiome. The close connection between the plant and its microbial symbionts is thus confirmed once again.

The research also has applications in the sugar beet industry, which can suffer from millions in losses every year due to storage rot. In cooperation with acib, the research team has developed an environmentally friendly crop protection agent together with one of the largest European sugar producers and the Graz start-up Roombiotic. acib researcher Peter Kusstatscher designed his own biocontrol agent for this purpose and tested it under industrial conditions. In addition, a process was developed that shows which beets from which fields are particularly susceptible to storage rot even before the beets are harvested and therefore indicating which beets must be processed quickly.