Even chocolate products can lose their gloss after a certain amount of storage time has passed and develop ‘bloom’ - a creamy grey/white patina. Now, armed with sophisticated analysis, companies can effectively protect their products from developing this unaesthetic coating or bloom.

There are two main types of chocolate bloom - sugar and fat. Each has different causes. However, no matter the type of bloom, the surface of the chocolate will become unappealing and will have a mottled or hazy look. If fat bloom is present, it is likely that the texture of the chocolate may have changed from when it was originally moulded.

The most obvious cause of sugar bloom is if water was inadvertently spilled on the chocolate or the chocolate came into contact with or was placed on something wet. Another common cause is condensation - for example, chilled chocolate will condense moisture from the air and the condensation will cause the sugar bloom. Sugar bloom may also occur if the chocolate has been in an environment with too high humidity.

The best way to avoid sugar bloom is to store chocolate in low-humidity environments with a stable temperature to avoid the risk of condensation.

Fat bloom typically appears as lighter colour blotches on the chocolate and, unlike sugar bloom, is not always caused by a simple set of circumstances. Fat bloom is more complicated, and it may be difficult to discover the actual source of the problem.

During manufacture, the chocolate is tempered to ensure that only stable crystals of the cocoa butter form, while the chocolate hardens.

If chocolate is not tempered, the unstable forms of cocoa butter crystal will form, most notability the β-Prime and α forms. After the cocoa butter hardens, these unstable forms will slowly change their forms to the stable β form. The β crystals are slightly smaller than the β-Prime or α forms, so that when this transition occurs, the chocolate contracts. The new stable β crystals then form, projecting above the surface of the chocolate, visible as bloom.

The second type of bloom is created when the crystals have softened instead of melted. It is during this period that cocoa butter that has slightly melted migrates towards the surface. When it breaks the surface, it pools ever so slightly, and when it cools the cocoa butter appears as spots.

Is it fat or sugar bloom?

Fat bloom is often mistaken for mould, but it really has nothing to do with this. It has no effect on the taste of the product and the product is not ruined by it.

Fat bloom does not appear immediately after production, but instead appears days or even weeks later. It can be one of the consequences that come from storage that is too warm or under temperatures that sharply fluctuate,” explains Wolfgang Danzl, food quality expert at the Fraunhofer Institute for Process Engineering and Packaging IVV in Freising. The researcher and his team are helping food makers with their efforts to improve the resistance of their products with chocolate coatings from bloom. 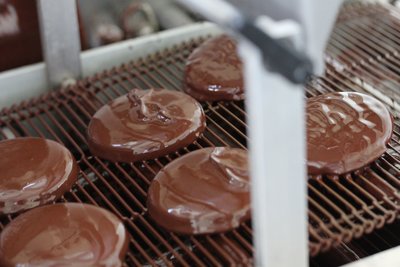 On the conveyor belt, chocolate-coated wafers are moved through the cooling channel. Image: © Fraunhofer IVV

Small and medium-sized enterprises suffer the greatest impact, because they produce a majority of the confections and baked goods. Chocolate coatings represent an effective technique for refining these products. In the process, the pastries, cakes, waffles and bars are run through a fluid, pre-crystallised chocolate stream. They then have to swiftly crystallise within the cooling channel - in other words, solidify - so that a shiny surface results. IVV researchers discovered that this stage is precisely where fat bloom can arise.

“It is not uncommon for residual chocolate at the end of the coating stage to flow right back to the start. During this recycling, the shortening used for filling and baking is washed off. We were able to prove that for the first time. To obtain the evidence, we developed commensurate methodology. Until now, there were hardly any investigations on coating systems,” Danzl explains.

The fat components from the fillings could penetrate to the surface of the confection and accumulate in the coating. This process is also called ‘fat migration’. Fine fat crystals accumulate at the surface and thus change the crystallisation properties of the chocolate coating.

“The filling fats cause the chocolate to crystallise more slowly, making the coating softer. This allows the fat to accumulate even more efficiently. Fat migration is facilitated, which in turn can lead to fat bloom formation,” the researcher explains.

The type and quantity of the filling fats influences the chocolate’s crystallisation behaviour. Cocoa butter with a minimum proportion of other fats and oils is highly predisposed to fat bloom. Most of all, nut oil and lauric fats tend to soften the chocolate coating, the IVV researchers determined through their lab testing. This includes coconut oil and palm kernel fat. They contain lauric acid, which does not mix well with the cocoa butter. By unravelling, the crystalline structure is destroyed; as a result, these white flecks emerge.

Producers can arrange to have the food experts at IVV investigate their chocolates at the laboratory. For this purpose, they have to remove the fluid mass from the tank during production. The researchers are capable of evaluating the quality of the chocolates, identifying the proportion of filling fat and analysing precisely how great the risk is for fat bloom to occur. They advise the companies about which measures to implement to optimise the production processes. Depending on the application, the phenomenon can be counteracted by adjusting the temperature gauge, the refrigeration channel or the backflow. Evaluating the baking and filling fats could furthermore help improve recipes.