Printing the meal not the menu 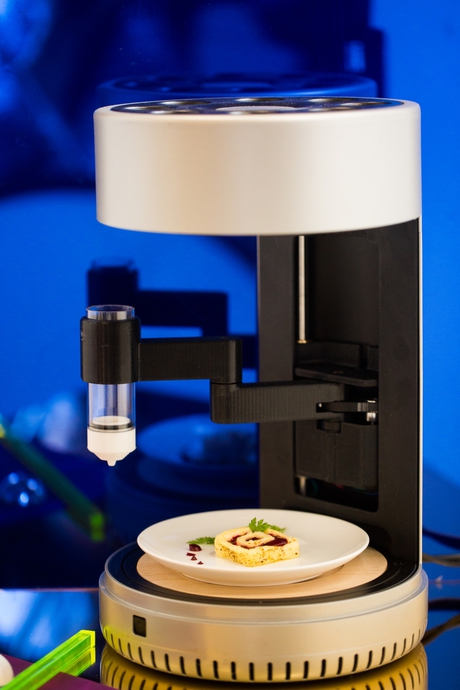 Imagine a printer that can fabricate edible items through computer-guided software. Well, you don’t have to imagine any more — it has already been developed.

We’re all accustomed to having appliances on our kitchen counters, from toasters and blenders to coffee makers and microwaves. If Columbia University Mechanical Engineering Professor Hod Lipson has his way, we’ll soon need to make room for one more — a 3D food printer that could revolutionise the way we think about food and prepare it.

Over the past year, Lipson and his students have been developing a 3D food printer that can fabricate edible items through computer-guided software and the actual cooking of edible pastes, gels, powders and liquid ingredients — all in a prototype that looks like an elegant coffee machine. The printer is the result of a design project devised by Lipson and his students, led by Drim Stokhuijzen, an industrial design graduate student visiting from Delft University of Technology in the Netherlands, and Jerson Mezquita, an undergraduate student visiting from SUNY Maritime College who is now a research associate in Lipson’s Creative Machines Lab (CML).

“Food printers are not meant to replace conventional cooking — they won’t solve all of our nutritional needs, nor cook everything we should eat,” said Lipson, a pioneering roboticist who works in the areas of artificial intelligence and digital manufacturing. “But they will produce an infinite variety of customised fresh, nutritional foods on demand, transforming digital recipes and basic ingredients supplied in frozen cartridges into healthy dishes that can supplement our daily intake. I think this is the missing link that will bring the benefits of personalised data-driven health to our kitchen tables — it’s the ‘killer app’ of 3D printing.”

Lipson’s team, which also includes PhD student Joni Mici and undergrad Yadir Lakehal, has been working nonstop to get the prototype up and running — the major challenge is getting the printer to ‘cook’ the food. Lipson noted that, while he is sure they can get the technology to work this summer, “stuffing it all into the new machine, which is much more compact than the printer we’ve been using, is a big challenge”. The printer is fitted out with a robotic arm that holds eight slots for frozen food cartridges; the students are now working on incorporating an infrared heating element into the arm.

Lipson, a member of Columbia’s Data Science Institute, sees 3D printing as a universal technology that has the potential to revolutionise lives by enabling us to design and manufacture things with unprecedented freedom: “If we can leverage this technology to allow artificial intelligence tools to design and create new things for us, we can achieve immeasurable potential.”

Instrumental in advancing 3D printing for more than 20 years, Lipson was one of the first researchers to work on multimaterial printing, first printing electromechanical systems and moving on to bioprinting. Printing biomaterials led him to printing food, which he says is an especially exciting area: “It touches on something that’s very basic to our lives. We’ve been cooking forever, but if you think about it, while technology and software have wormed their way into almost every aspect of our lives, cooking is still very, very primitive — we still cook over an open flame, like our ancestors millennia ago. So this is one area where software has not yet permeated. And when software touches something, it takes off.” 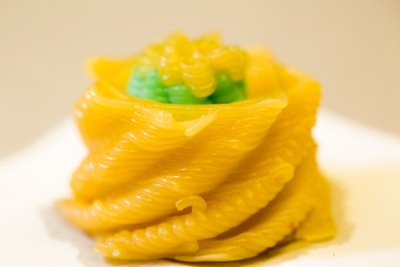 Taking off to the kitchen, Lipson and his team are collaborating with New York City-based International Culinary Center (ICC), a top culinary school in the US. Working closely with Chef Hervé Malivert, ICC’s director of food technology and culinary coordinator, Lipson led several workshops to bring together ICC’s culinary creativity with the CML’s technical knowledge to create new kinds of foods — novel textures, combinations and spatial arrangements of basic ingredients that chefs cannot currently put together. Malivert hoped to expose his students to the future of food and new food technologies; Lipson’s aim was to explore and study the potential of printed food, to create and document the student-designed recipes, and unveil what food in 2025 might look like.

“The engineers have tackled how 3D printing works, but now we turn to the kitchen experts to face the creative question of what can be made,” said Lipson.

The workshops were a big success for both the chefs and the engineers. “It was exciting to be able to design dishes with the software, to see the drawing ahead of time, to see what’s going to happen, to make interesting shapes and geometries,” said Malivert. “This will help with planning, and will be great to have at home. As these printers improve, it will be exciting to see where we can go with these machines. For instance, I think they will be very useful in the area of health and nutrition, especially in nursing homes and hospitals.”

While working with the ICC, Lipson also offered a new class this past spring on digital manufacturing at the Engineering School. More than 32 students, mostly undergrads, took the pilot course, whose final project focused on food printing. At the end of the semester, they demonstrated unusual printed edible constructs. Cream cheese was a popular choice as it was easy to extrude from the printer and blended nicely with other ingredients. He plans to offer the class again next year.

Lipson and his team aim to have their prototype printing much faster and more accurately by the end of the year and, they hope, cooking as it prints, too. Unlike conventional oven cooking, their 3D printer will be able to cook various ingredients at different temperatures and different durations, all controlled by new software being developed by Computer Science Professor Eitan Grinspun. The software is critical, since the 3D printer they have been experimenting with is meant to design and print machine parts, holes, screws, notches, cuts and bends, not your next meal. “This is the wrong language for food,” explained Lipson. “With food you want to layer, coat, sprinkle, mix, so we need a new language so that we can describe what we want to the printer. And it has to be easy for someone who’s not an engineer to create a digital recipe.”

Grinspun, who directs the Columbia Computer Graphics Group, is creating software that can predict what a 3D-printed shape will look like after it has been cooked for a specific time at a set temperature. His team is developing a volumetric material simulator that accounts for thermal transfer and the change of material phase (the food’s viscoelastic properties) under heating/cooling conditions; in effect, attempting to replicate oven-cooking food.

3D food printing offers revolutionary new options for convenience and customisation, from controlling nutrition to managing dietary needs to saving energy and transport costs to creating new and novel food items. Lipson sees it as the ‘output device’ for data-driven nutrition and personal health, akin to precision medicine, with huge potential for a profound impact.

Lipson is especially excited about working with the ICC chefs and plans to continue the collaboration. “We’ve already seen that putting our technology into the hands of chefs has enabled them to create all kinds of things that we’ve never seen before, that we’ve never tried. This is just a glimpse of the future and what lies ahead.”