Traceability with a cherry on top 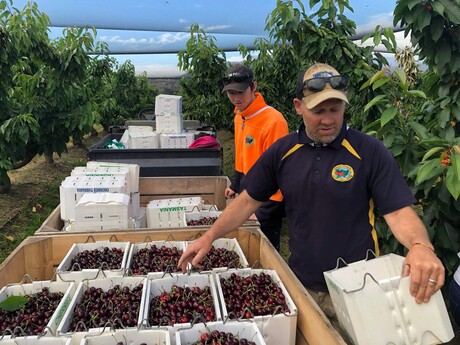 Cherries Tasmania Orchards has adopted AgPick, an automated harvest management tool that allows the company to keep track of the fruits being picked in its orchards. The company had been looking for an automated system for doing this and the high level of information that AgPick offered meant that it was suitable for the family-owned company.

The system tracks who is picking the cherries, along with their volume and grade. This is different from a simple counting solution and instead reports back to the head office, in real time, the minute details of the picking that is occurring, allowing for a greater level of traceability.

RFID technology is used by the tool, which can also utilise QR codes and barcodes, UHF and individual tag tracking, in order to capture data and the source of when a fruit is picked. This all amounts to a snapshot both of who is picking fruit and when, but also makes it possible to understand how to optimise efficiency and productivity across the orchards.

The tool was partly adopted to keep track of pieceworkers’ hours in order to pay the minimum wage according to recently altered law that requires farms pay fruit pickers for their time. The tool’s implementation means that the company will be able to keep track of its workers so that they are properly paid, while also increasing the level and quality of data that the cherry company has access to regarding its fruits.

As up to 200 seasonal workers may be employed by Cherry Tasmania during summer, the system will ensure that their hours worked are appropriately tracked without the need for wasting time on data entry and logistics.

Cherries Tasmania Orchards had been on the lookout for an automated system that kept track of worker activity as well as offering a clearer view of the picking operation as a whole.

“We were conscious during the selection process that any software we employed should help us comply with the new Fair Work regulations and help us keep more accurate records. It was time to move to more modern technologies,” said Cherries Tasmania Orchards’ Managing Director Nic Hansen.

“As part of our due diligence, we spoke to other producers using AgPick and it was always highly recommended. We like that AgPick Technology is a smallish Australian company with faces and names we know and with people who can be on the ground to support us — people who are relatable, approachable and understand what we’re trying to do.

“How the process has unfolded from our initial contact in November after the Fair Work decision to roll out in time for the harvest in December is its strength.

“By collecting better data over future harvest seasons, we’ll be able to determine when people are at their most productive and when we need to call it a day.”