The cobots are coming to a food industry near you 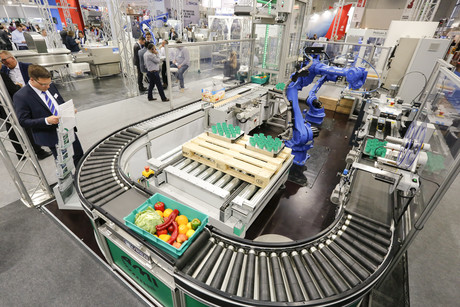 A new generation of robots is on the verge of making the breakthrough in the food and beverage industry: the cobots.

Equipped with collaborating arms, sensitive sensors and cutting-edge safety technology, the autonomous lightweight robots will work hand in hand with the employees in future. Already an indispensable element of automation today, robots are a key component of the Fourth Industrial Revolution.

In 2016 the global stock of industry robots was around 1.8 million pieces and by 2020 this number will have increased to more than three million as part of a sustained upwards trend. “The rapidly growing offer of models featuring increasing cognitive skills and intelligent technologies extends the fields of application for industry robots and gives companies of all sizes the chance to automate their businesses flexibly,” said Joe Gemma, president of the International Federation of Robotics.

Human/robot collaboration (HRC) is becoming more and more evident as agile lightweight robots with up to seven axes that can move loads of up to 15 kg are already available. These cobots are less dangerous than classic robots as their net weight is low and their motion sequences slower. The benefit is that these robots do not need to work behind safety barriers but can be integrated on the factory floor.

The aim is for them to relieve their human colleagues by carrying out monotonous and ergonomically unfavourable tasks. And they can do this repetitively without making errors.

Typical fields of application are:

The challenge for food producers particularly lies in the optimal integration of the mechanical assistants into the production processes. This is made possible by automation platforms which unite high-precision mechanics, sensors as well as complex control and measuring technology in the tightest of spaces.

More safety thanks to sensory skin

The central distinguishing feature between the classic encased robot applications and the HRC is that possible collisions are part of the real scenario. The more intensively humans and machines work together, the stricter the safety regulations.

In order to meet the high demands, cobots are equipped with complex safety packages. Torque sensors in all axes ensure that the robots are sensitive. In this way they can recognise people and obstacles in the environment and react to them in real time. The cobots are additionally equipped with capacitive, optical and tactile sensors. If a person approaches a robot, it will automatically reduce its speed — right down to the safe stop. For example, the TX2 touch by Stäubli features a touch-sensitive surface that ensures the six-axes robot stops when merely touched.

Cobots are designed to take on tasks that up until now only the highest-performance grippers were able to master: the human hand. The engineers at Festo have let themselves be inspired by nature and have developed a gripper based on a tentacle.

The Octopus Gripper comprises soft silicon that can be pneumatically controlled. As in the role model, two rows of active and passively regulated suction cups are attached to the inside of the tentacle. If the gripper is impinged with compressed air, it bends inwards and interlocks gently around the respective item. The application of such flexible grippers is conceivable in places where a large number of drinking bottles or food is handled — for example, in plants where different batch sizes have to be produced within the shortest space of time.

See the cobots in action

In March next year Anuga FoodTec will be held in Cologne, Germany. The event will feature the Robotik-Pack-Line, an automatic line with a capacity of 80 strokes a minute that will take over the complete packing process on-site from primary to secondary packing, through to the palletisation — including an inline leakage test and contaminant inspection.

In addition, robot companies from around the world, system integrators and suppliers of gripper and sensor technologies will all be flying their flags.

The distinct differences between tubular chain and cable drag conveyors are discussed in relation...

Economics of the pandemic: are your supply chains resilient?

Food manufacturers may be one of the few industries that could actually see some economic...

Manufacturers of dietary supplements are encouraged to trace every ingredient through their...