As a means of making the planned transition to the new era of self-service in the fruit and vegetable aisles attractive for both young and old, Carrefour and the technology manufacturer Bizerba are currently installing around 1400 scales with optical article recognition and an intuitively operable touch screen in 200 hypermarkets. The aims are clear: weighing and labelling procedures should be quicker, sales and customer satisfaction should be higher and staff should be able to be used more flexibly for a larger range of tasks. 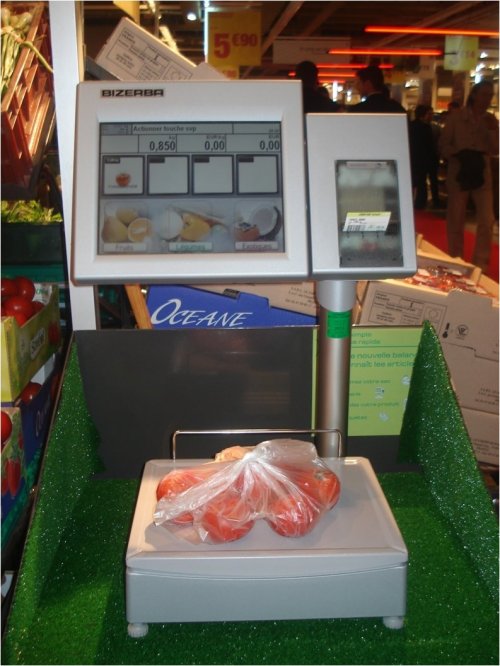 Up until now, weighing stations were set up in the fruit and vegetable aisles of the Carrefour hypermarkets. There, customers had to place their goods on a scale and a member of staff took care of the rest: they retrieved the product number, printed the respective ticket and stuck it to the bag. The scales in series CE II 8615, however, have a camera for automatic article recognition. They automatically identify fruit and vegetables using colour, shape, size and surface.

After analysing these specifications, the customer is shown four items to select on the display. They choose the correct one by pressing it with their finger, which then gives the scale direct feedback on its recognition. “The more the scale recognises and is confirmed, the more intelligent it becomes,” says Mr Groubon at Bizerba France. “After some time, the database becomes so mature that amazing recognition performances of over 98% are possible. This even works if the articles are already in the carrier bag.”

Furthermore, the hypermarket can centrally manage all article information and prices and update the scale displays via the internet. Should any difficulties arise on site, Bizerba service technicians can access the scales via remote control, analyse the problem and remove it immediately. This effectively reduces long downtimes and on-site jobs.

Should tomatoes be kept in the fridge?

There is much debate about the correct storage of tomatoes; a German research team investigates...