What do hatching chicks and food safety have in common? 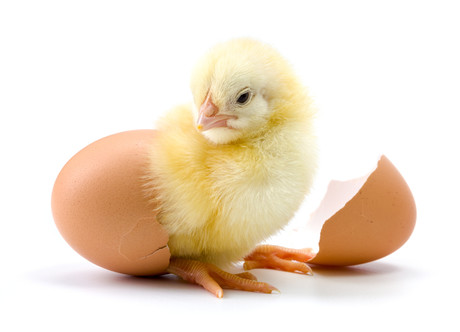 Eggshells seem so fragile but so robust at the same time; they can protect a chick as it develops, but they are weak enough to allow it to break its way out. Scientists from McGill University said this is all down to the eggshell’s nanostructure, and their findings could help improve the food safety of eggs.

Acting as a protective chamber that provides the chick with all the nutrients needed to grow, a bird’s eggshell has the capability to avoid fracture until the chick is ready to hatch. Marc McKee’s research team in McGill’s Faculty of Dentistry worked alongside Richard Chromik’s group in Engineering to find out how this happens, a task that has proven to be difficult in the past. They used new techniques to study the molecular nanostructure and mechanical properties of the interior of the eggshell.

“Eggshells are notoriously difficult to study by traditional means, because they easily break when we try to make a thin slice for imaging by electron microscopy,” explained McKee, who is also a professor in McGill’s Department of Anatomy and Cell Biology.

“Thanks to a new focused-ion beam sectioning system recently obtained by McGill’s Facility for Electron Microscopy Research, we were able to accurately and thinly cut the sample and image the interior of the shell.”

Dimitra Athanasiadou, the paper’s first author, found that shell strength is determined by the presence of nanostructured mineral associated with osteopontin, an eggshell protein that can also be found in bone. Each three layers of an eggshell have different amounts of osteopontin; higher concentrations of the protein mean a smaller nanostructure size and therefore a tougher shell, while larger nanostructures on the inside layers are weaker.

During incubation this inner layer of the shell dissolves and provides chicks with calcium to develop their bones. This process has the dual effect of weakening the shell, allowing chicks to break it when ready to hatch.

The researchers were able to recreate a similar nanostructure by adding osteopontin to mineral crystals grown in the lab. Professor McKee suggested understanding how proteins influence the toughness of the shell could have important implications on food safety.

“About 10–20% of chicken eggs break or crack, which increases the risk of Salmonella poisoning,” said McKee. “Understanding how mineral nanostructure contributes to shell strength will allow for selection of genetic traits in laying hens to produce consistently stronger eggs for enhanced food safety.”

The findings were published in Science Advances.