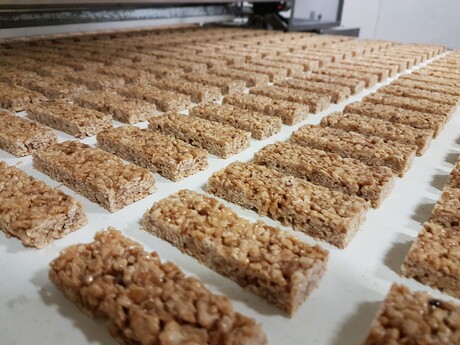 Healthier on-the-go cereal bars with 30% less sugar, the same sweet taste and more fibre are being developed by food scientists from the University of Reading.

A team from the Department of Food and Nutritional Sciences are working together with industrial partners — Strauss Group, DouxMatok, Herbstreith & Fox and Bühler — on a new cereal bar project through the EIT Food-funded SuReBar project.

The sugar in cereal bars comes predominantly in the binders that are used to hold the cereal components together. The binders may contain syrups such as glucose syrup or honey, sometimes in addition to sucrose. Therefore, the sugars have both a physical function as a binder as well as providing sweetness.

Dr Julia Rodriguez Garcia, the project leader of SuReBar and Lecturer of Food Science and Technology at the University of Reading, said cereal bars are considered by many consumers to be a healthy snacking alternative that’s suitable for a busy lifestyle.

“However, the reality is they often contain between 13% and 40% sugar and may have little other nutritional benefit,” she said.

“The EIT Food project SuReBar creates cereal bars that would be much more appealing for people wanting a healthy snack. The cereal bars are being designed with 30.6% less sugar content, no added high-intensity sweeteners and higher levels of fibre than the standard alternative.”

In particular, pectin fibres from Herbstreith & Fox have been used in combination with Legria — a newly developed ingredient from brewer’s spent barley grain which is high in fibre and protein.

“Our aim is also to maintain the sweetness of the reduced sugar products using technology from Douxmatok, where they combine normal sugar alongside hydrocolloids (complex nondigestible carbohydrates) to more efficiently deliver sugar to the taste receptors on the tongue,” Garcia said.

The team behind SuReBar have run successful pilot plant trials and samples are now going to be analysed in terms of shelf life and consumer acceptability. The plan is to continue working in the development of these sugar reduced cereal bars at Strauss to be able to commercialise them by Summer 2023 in Israel and in the future in other European markets.

Image supplied by the University of Reading.