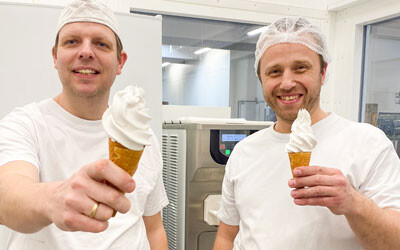 Danish food company Naturli’ has developed a 100% plant-based soft ice product that is ready to be distributed worldwide.

Naturli’ CEO Henrik Lund said the concept, which took two years to produce, is made from rice and has a vanilla flavour.

“In Denmark alone, 20 million cornets with soft ice are eaten every year, so just think how many millions are consumed on a world scale. That means you have to be incredibly humble, really thorough and quite stubborn if you want to improve on ice that everybody loves. It is no use coming up with plant-based soft ice that is okay. It has to be no less than world class,” Lund said.

The soft ice can be made in the same soft-ice machines used for traditional soft ice.

Naturli’ said the product has already aroused interest in Italy, the home of gourmet ice cream. The company said it will be taking more than 75% of the market inside three years in Denmark.

The market for plant-based foods is growing rapidly in large sections of the world, particularly in the confectionery and dessert industries.

“Foods are responsible for 20–25% of man-made carbon dioxide emissions. That is why it is so important to think about how the foods of tomorrow can make far less impact on the planet than the foods most of us have known since we were children,” Lund said.

“The foods of the future will be far more plant-based, as consumers are well aware. So consumers must also have that choice when they decide to treat themselves to a good ice. Once they discover that the plant-based soft ice tastes at least as good as — or better than — the familiar version with cream, then the choice is easy.”