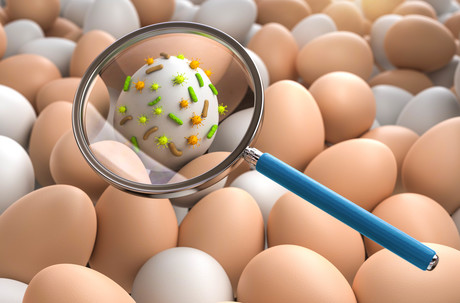 Researchers at the University of New South Wales have developed a series of accurate and highly sensitive DNA tests which can identify the five most common Salmonella subtypes in Australia. These new tests are fast, capable of detecting DNA in eight minutes and work at a constant temperature, unlike other methods that require specialised equipment for temperature cycling.

Pending further research, scientists say the tests have the potential to help public health laboratories and industry reduce the spread of Salmonella outbreaks in the future. The research, published in The Journal of Molecular Diagnostics, overcomes the laborious traditional bacteria culture method, paving the way for fast-track testing directly from specimens. The new tests could also play a critical role in quickly and accurately tracing the origin of future Salmonella infections.

According to the World Health Organisation, the bacteria Salmonella causes a disease known as Salmonellosis, characterised by acute onset of fever, abdominal pain, diarrhoea, nausea and sometimes vomiting. Salmonellosis is generally contracted through the consumption of contaminated food of animal origin (mainly eggs, meat, poultry and milk), although other foods, including vegetables contaminated by manure, have been implicated in its transmission. Person-to-person transmission can also occur through the faecal–oral route. Human cases also occur where individuals have contact with infected animals, including pets. Infected animals often show no signs of disease.

“It is essential for public health investigators to have a fast, simple way of tracking down the source of Salmonella outbreaks — so, the ability to test for different types of Salmonella is important. Salmonella, whether it’s in a clinical or food sample — even in faecal matter — may exist in minute amounts and requires highly sensitive methods to detect. Our enhanced Multiple Cross Displacement Amplification (MCDA) method can detect tiny amounts of DNA rapidly and at a constant temperature, which makes it an excellent fit for a simple, rapid and sensitive bacterial detection test. It’s a clear improvement upon the existing MCDA test for Salmonella that does not distinguish between different subtypes of Salmonella,” said Professor Ruiting Lan, senior author.

In 2017, more than 16,000 cases of Salmonella poisoning were reported in Australia; a 30% increase on the previous 10-year average. The rate is estimated at 185 cases per 100,000 people, per year. Five Salmonella subtypes, known as serotypes, caused more than 85% of the infections in 2017. The new detection method can identify the five most common Salmonella serotypes and will be crucial to help control the spread of infection during outbreaks.

“Thousands of Salmonella serotypes exist, but we developed and evaluated seven MCDA tests for the rapid detection and differentiation of the five most common Salmonella serotypes in Australia: S. Typhimurium, S. Enteritidis, S. Virchow, S. Saintpaul and S. Infantis. It’s important to be able to detect the different serotypes because some are more likely to be associated with local infections while others are more likely to be associated with imported cases. In addition, at least two of these serotypes — S. Typhimurium and S. Enteritidis — are also the most prevalent Salmonella serotypes throughout the world. So, our research is applicable to other regions and countries. Another advantage is the fact that our tests do not require specialised detection equipment, thereby simplifying future application in clinical or industrial settings,” said Xiaomei Zhang, first author and UNSW Science PhD graduate.

The DNA tests developed in the study are unique, because the gene markers used were selected from analysing thousands of Salmonella genomes.

“These markers are specific to the given serotypes and thus futureproof our new tests as traditional culture-based serotyping is being phased out,” Professor Lan said.

The team of researchers will continue their research through field testing.

“The performance of the MCDA tests warrants further validation — so, more work needs to be done. The test has been developed using pure cultures. It will need to be validated using samples in health, environment and food industry settings. It’s difficult to know when our tests would become available, but they are part of the global trend towards culture-independent diagnostic tests which can identify the bacteria causing a foodborne illness without the need to culture the bacteria in a lab. Down the track, our tests could be used in clinical diagnosis in determining the common serotypes that cause Salmonella disease, to analyse trends of serotypes for public health surveillance, and they could also have application in the food industry,” Professor Lan said.