An apple a day provides 100 million bacteria for your gut 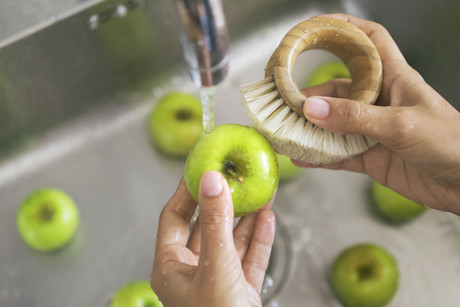 Research published in Frontiers in Microbiology reveals that organic apples have a more diverse and balanced bacterial community, making them healthier and tastier than conventional apples, and better for the environment.

“The bacteria, fungi and viruses in our food transiently colonise our gut. Cooking kills most of these, so raw fruit and veg are particularly important sources of gut microbes,” said study senior author Professor Gabriele Berg, from Graz University of Technology, Austria.

Approximately 83 million apples were grown in 2018, with production continuing to rise. Researchers have previously studied the fungal content of apples and are now analysing the bacteria in apples.

Berg’s group of researchers analysed the microbiome of the apple, comparing the bacteria in conventional store-bought apples with those in visually matched fresh organic apples. Researchers separately analysed the stem, peel, flesh, seeds and calyx (found at the bottom of the apple, where the flower used to be) of the apple and discovered that overall, the organic and conventional apples were occupied by similar numbers of bacteria.

“Putting together the averages for each apple component, we estimate a typical 240 g apple contains roughly 100 million bacteria,” Berg said.

The majority of the bacteria can be found in the seeds, with the rest located on the flesh. Discarding the core of the apple reduces bacteria intake to near 10 million. Analysis indicates that freshly harvested, organically managed apples feature a more diverse, even and distinct bacterial community, compared to conventional apples.

“This variety and balance would be expected to limit overgrowth of any one species, and previous studies have reported a negative correlation between human pathogen abundance and microbiome diversity of fresh produce,” Berg said.

“Methylobacterium, known to enhance the biosynthesis of strawberry flavour compounds, was significantly more abundant in organic apples; here especially on peel and flesh samples, which in general had a more diverse microbiota than seeds, stem or calyx,” Berg said.

It is important to note that the conventionally grown apples analysed in the study were packaged and refrigerated for days before analysis, while the organic apples were analysed immediately following harvest, and were grown on a different farm, albeit in the same region.

“Our results agree remarkably with a recent study on the apple fruit-associated fungal community, which revealed specificity of fungal varieties to different tissues and management practices,” said Birgit Wasserman, co-author of the study.

As the apple fungal community is also specific to each apple variety, bacterial analyses need to be carried out in other cultivars, too. Berg’s research is a key step towards confirming to what extent diversity in the food microbiome translates to gut microbial diversity and improved health outcomes. The microbiome and antioxidant profiles of fresh produce could potentially become standard nutritional information, displayed alongside macronutrients, vitamins and minerals to guide consumers.